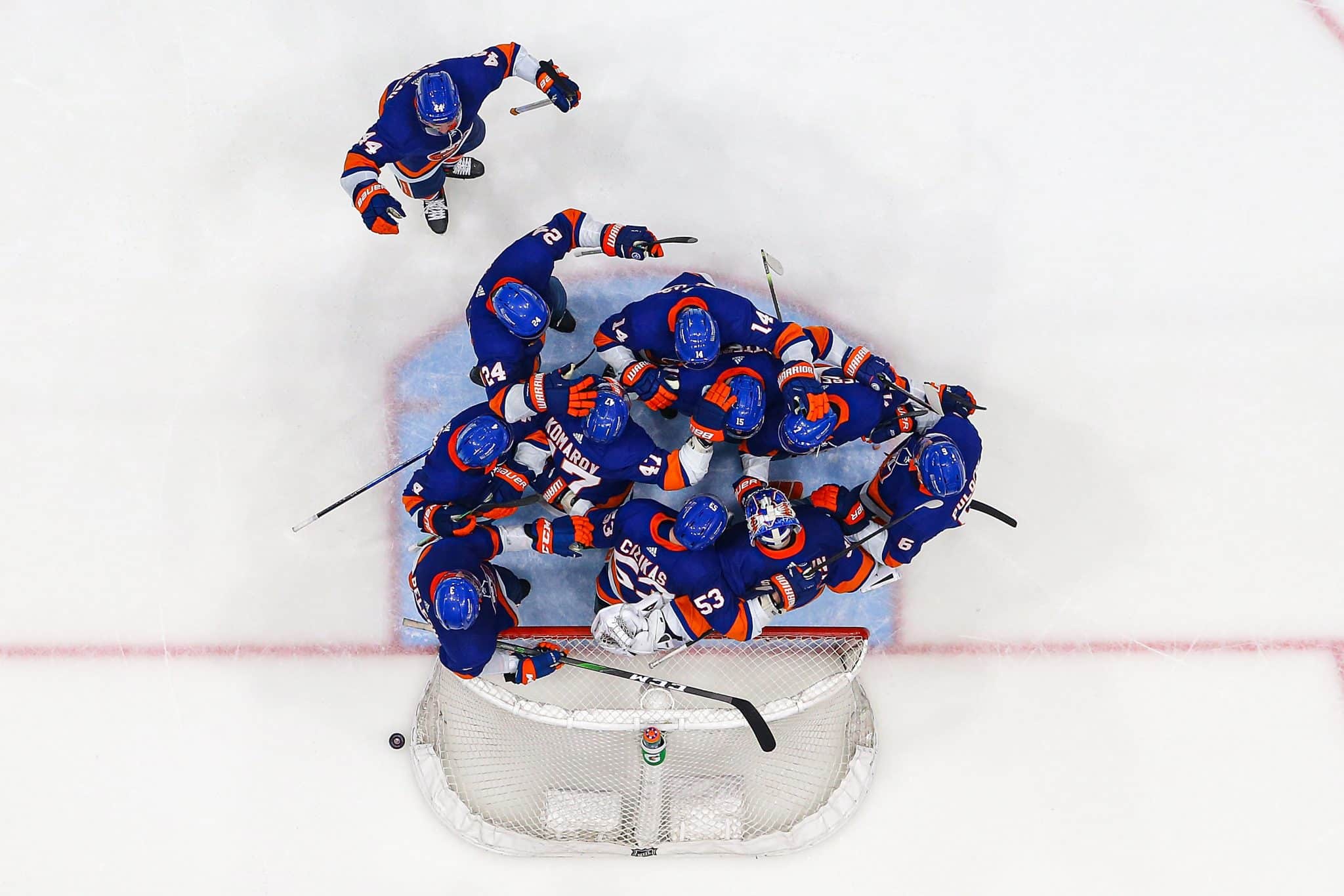 Perseverance, depth, and luck allowed the Islanders to beat the Penguins in six games and move on to the second round.

For the first time since 1993, the New York Islanders have clinched a playoff series at Nassau Coliseum.

On Wednesday night, in the sixth game of the first round of the 2020 playoffs, the Islanders eliminated their rivals and the winners of the East Division, the Pittsburgh Penguins, on home ice.

One of the best offensive teams of the regular season, the Penguins couldn’t do enough to emerge victorious. The team with the elite defense was triumphant this time and Pittsburgh’s postseason struggles against the Islanders continue.

The Islanders did some things poorly and others very well, but were also quite lucky and obviously well-coached.

Barry Trotz has a reputation for being the best head coach in the NHL. He showed why in this series. His boys weren’t always at their best, but he found a way to help them forget their bad periods, learn from them, and then fight back.

He made the right calls and fired his players up when he needed to.

Trotz showed the world the importance of great coaching, but he wasn’t the only reason the Islanders are moving on.

Before we take a look at some of the other contributing factors to the Islanders’ success, let’s look at what they didn’t do well.

Of course, the story would be very different if captain Anders Lee was still in the lineup. His absence really has been noticeable and we can’t expect his line to produce the same way without him. However, even so, the top guys must be better.

It’s tough to blame Komarov. He’s a depth piece and isn’t used for his offensive ability, as Trotz has noted on several occasions. Komarov is valued for his physicality and the intangibles he brings to the table.

But that can’t be an excuse for Barzal and Eberle’s lack of production, Barzal especially. Barzal is the fastest skater in the league and one of the best playmakers. No one enters the zone like him and there’s a reason he’s the face of the Islanders.

He obviously misses his linemate and captain on his wing, but your best player has to give you more in a playoff series. These three guys weren’t bad, exactly, they just weren’t consistent.

Barzal and company are lucky that their teammates stepped up and carried the load for them.

Ilya Sorokin might just be the reason we’re discussing the Islanders’ success, but it’s primarily because Semyon Varlamov couldn’t get it done. After missing the first game of the series due to injury, Varlamov made his 2020 playoff debut in game two.

Overall he was fine, but the first goal he gave up was soft and a reason why his team lost the game. It’s tough to put the whole blame on him, but he’s definitely a significant reason why the Islanders went on to drop game three.

Varlamov was shaky and not himself, even though he was one of the best goalies in the NHL during the regular season.

The Islanders are incredibly lucky to have Sorokin or else Varlamov could have ended up costing them the series.

Enough of the negativity. Let’s get back to how the Islanders were able to get past the Penguins this series.

The three members of the Islanders’ second line were the stars of the show in these six games. Each player recorded a whopping three goals and three assists.

Anthony Beauvillier is proving how clutch he can be. Brock Nelson reminded everyone why he was one of the very best second-line centers in hockey just a season ago. Josh Bailey is the perfect combination of veteran leadership and on-ice production, especially in the playoffs.

This Islanders team is one of the best in the league, but is even better when the dangerous second line produces the way it did during this series.

Bailey, Beauvillier, and Nelson were especially noticeable in game six and were the main reason why the Islanders finished things up right then and there.

The importance of the “Identity Line”

The best fourth line in hockey, the “Identity Line” showed their value in this series. They didn’t produce much other than Cal Clutterbuck’s two goals: Matt Martin didn’t get on the scoresheet and Casey Cizikas had one assist.

Even so, the three of them played well and did things that their teammates did not. We mentioned throughout the series that the Islanders weren’t playing with the same physicality that they usually exhibit.

It was hurting them, especially during the games they lost, but that wasn’t the case for the fourth line. Cizikas, Clutterbuck, and Martin used their bodies well and relied on their abilities as good two-way forwards to help their team. They were successful.

Of course, they weren’t perfect. Cizikas and Martin did their fair share of scoring during last year’s run and it would be nice to see them produce offensively, once again.

Fourth lines can make or break teams and the Islanders’ fourth line is a key reason why this team is so good.

Adam Pelech and Ryan Pulock might have been the Islanders’ best defensive pairing during the regular season as well as one of the best in the entire league, but that wasn’t the case in this series.

This won’t be the most popular point, but props must be given to the Islanders’ second defensive pairing. They weren’t perfect, but Nick Leddy and Scott Mayfield were the team’s best defensive pair this series.

They were incredibly steady defensively, for the most part, and  were even better offensively. Mayfield was the team’s best player in games two and three! Leddy recorded two assists in this series while Mayfield scored one goal and three assists.

Leddy and Mayfield reminded hockey fans why the Islanders’ blueline is so elite and they must play the way they did in this series if the Islanders hope to go far this postseason.

Sorokin might be the reason the Islanders made it out of the first round. His teammates contributed significantly, but he found himself carrying the team, at times. He is undefeated in the playoffs and looked like a brick wall against Pittsburgh.

The Penguins had one of the best offenses in hockey this season and for Sorokin to play the way he did against them is remarkable.

It’s difficult to put into words how well Sorokin played in his first six NHL playoff games and his importance to this group. He was especially outstanding in game five. Talk about carrying his team.

The Islanders don’t win that game without Sorokin, who was doing all the work for his teammates the majority of the time.

The net is now Sorokin’s to lose, but it doesn’t look like he’ll be doing that anytime soon. The future sure is bright for the Islanders in net. This kid is special.

The deepest teams are the ones that end up going far and there’s no question that the Islanders are just that. We’ve already touched on their depth quite a bit. Their fourth line being the best in the league allows them to accomplish what they have.

We’ve touched on these factors, but the Islanders are even deeper than that. Komarov, a depth piece, isn’t the greatest offensive player, but his skill-set is one every team wants their players to have.

He’s physical and useful on the penalty kill. Komarov doesn’t always produce, but he can be used as a top-six forward.

Then we have the Oliver Wahlstrom situation. Wahlstrom had a fantastic regular season and emerged as a dangerous offensive weapon, especially on the power play. He had been playing quite well before going down with a scary injury in game five.

The newly-acquired veteran Travis Zajac got the call to replace Wahlstrom and was outstanding. He made a jaw-dropping defensive play with his stick to save a goal in the first and went on to have a fantastic game thereafter, recording an assist and showing off his talent as a solid two-way forward.

When the big guns couldn’t get it done, other guys stepped up and helped the Islanders to the series victory. Their depth will be key along the way.

Evidently, the Islanders did many things well this series. However, they lucked into this win, too.

For one, the Penguins’ top players didn’t produce as they should have. Pittsburgh is home to three future Hall of Famers, but these guys didn’t always look like it. Kris Letang and Evgeni Malkin were good, but inconsistent.

Sidney Crosby, however, is a reason why the Penguins were sent home. Crosby scored just one goal and one assist in this series and was even the Penguins’ worst skater in game six.

He didn’t show up when his team needed him to and although the Islanders deserve credit for shutting him down, they also did luck into a truly poor performance from him and some of his big-name teammates.

This was the worst playoff series of Crosby’s career so far, and the Islanders are fortunate to be on the receiving end of it.

The biggest reason the outcome of the series is how it is, however, is Tristan Jarry. Pittsburgh’s goaltender was nothing short of horrific. Jarry gave up 16 goals and the vast majority were ones he should have had.

It’s fair to say that he cost his team this series.

Credit must be given to the Islanders for taking advantage of the Penguins’ weaknesses and doing so many things well, but this series could have gone very differently had the Penguins had better goaltending.

It’s almost impossible to emphasize how bad Jarry really was in this series and it came to the Islanders on a silver platter.

A combination of poor performances by several key players on the Penguins and the Islanders’ forwards, defensemen, and goalie stepping up got the Islanders to this point.

This was an impressive series in which the Islanders showed that the playoffs are a different animal and even though they’re technically an underdog, they’re fully capable of running with the best.

NHL shuts down until after Christmas