New York’s best player is playing like it and is a reason why their series is tied.

Ever since New York Islanders captain Anders Lee went down with a season-ending injury back in March we knew that their best player, Mathew Barzal, would have to be just that.

He would have to step up in a big way in order to lead his team to the playoffs and then step up yet again during the playoffs.

Barzal had a strong regular season, recording 45 points in 55 games. With 17 goals, he might have set a career-high in that category had the season been longer (his record is 22 goals in his rookie season when he won the Calder Trophy). 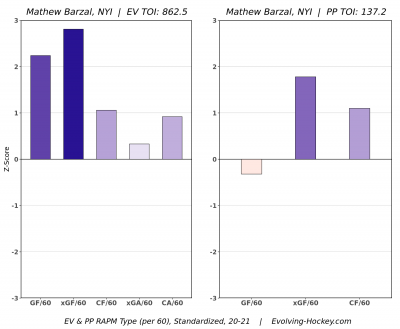 He got off to a slow start in the playoffs. Barzal notched just three assists in six games against the Pittsburgh Penguins and the Islanders were lucky to have been able to make it out of the first round without Barzal playing like his usual self.

I noted in my Boston Bruins series preview that Barzal was fortuitous enough to see his teammates pick up the slack and do enough to beat the Penguins in the first round, but that that wouldn’t be the case against such a dangerous Bruins team.

The Islanders would need Barzal this time around, and in a huge way.

So far, the 24-year-old has not disappointed. Barzal wasn’t great in the first game of the series, but that has proven to be an anomaly. He notched an assist, was one of the team’s best forwards, and wasn’t a defensive liability.

Although the Islanders lost game three, Barzal stood out even more than he did in the previous game. He was the team’s second-best forward and third-best player.

It looks like Barzal has only gotten better since. In the Islanders’ dominant victory on June 5th, Barzal was the best player on the ice for either team, scoring a goal and an assist.

That was Barzal’s best game, but he was still instrumental in helping his team take the series lead two days later.

Since making his debut, Barzal has been heralded as one of the fastest skaters in the NHL and one of the very best at zone entries. He’s a fantastic playmaker and is very creative.

He’s so special to this Islanders team and is a key reason why they’re in this position. His skill-set is great: he scores at a fantastic rate but also does everything extremely well in the offensive zone.

Did Barzal find his scoring touch after getting off to a slow start in the playoffs? Is this personal because the Bruins passed on him three times during the 2015 draft?

The hope is that he’s finally gotten going and will lead the Islanders to both a series victory over Boston as well as a deep playoff run.

Jack Harlow’s Gonna Star In The “White Men Can’t Jump” Remake, And This Black Girl Is Jumping With Excitement