He was also voted one of the defensemen on the 2020-21 NHL First All-Star Team. Colorado’s Cale Makar was the other defenseman on the first team.

In his sophomore season he helped take the Rangers’ defense to the next level and was one half of one of the best defensive pairings in hockey alongside his linemate Ryan Lindgren.

Fox was in good company, sharing the honor of being nominated with Victor Hedman of the Tampa Bay Lightning and Cale Makar of the Colorado Avalanche.

It’s appropriate that many Rangers fans have been calling Fox the best Rangers defenseman since the great Brian Leetch. Fox is the first Ranger to win the Norris since Leetch in the 1996-97 season.

This marks the first time a Ranger has won an individual NHL award since Dominic Moore won the Bill Masterson Memorial Trophy during the 2013-14 season.

A nominee for the Calder Trophy just one year ago, Fox came up short and many believed he was snubbed. That wasn’t the case with the Norris this time around. 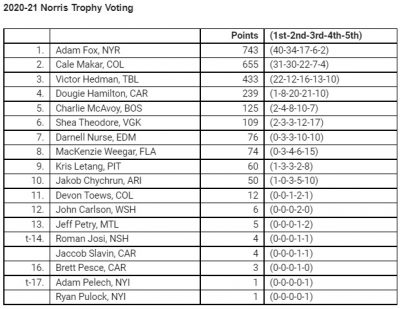 The Queer Athletes Looking For Gold At The 2022 Winter Olympics