The New York Rangers missed the 2021 playoffs, but this promising, young team had an impressive season.

Several key veteran players didn’t have their best of years, but many young players stepped up, allowing the Rangers to have a top-10 offense in the league.

The fact that the Rangers had a top-10 offense in the league this season before, so that didn’t come as much of a surprise.

The real shocker was the performance of the defense.

With now-head coach of the New Jersey Devils Lindy Ruff in charge of the defense lasts season, the Rangers had one of the worst bluelines and penalty kills in hockey. We saw a 180-degree flip this season.

The Rangers had a well-above average defense and one of the best penalty kills in the league. That’s a significant step up from where they were a year ago.

The team’s top pair of Adam Fox and Ryan Lindgren emerged as one of the bets defensive pairings in hockey at both ends of the ice. They were incredibly impactful offensively and were almost shut-down defensemen in their own end.

Lindgren has proven to be the real deal, capable of playing at a high level as the team’s number one LHD.

Fox was the best defenseman in the league this season, taking home the Norris Trophy in just his second year.

After an underwhelming inaugural season with the Rangers last year, veteran defenseman Jacob Trouba quietly became one of the team’s most important players in 2021. He was so much more impactful offensively and held his own defensively.

His season-ending injury hurt the team almost as much as it hurt him. His absence was glaring and only then did it become clear how important he was to his team and how well he had been playing.

Many have been calling for him to be named captain, even! Trouba’s influence was especially noticeable when looking at his linemate, K’Andre Miller.

Miller didn’t have the best season, but set a good foundation to build on. He was decent offensively and not-so-good in his own end, but looked very confident, composed, and poised, especially for a rookie.

He garnered the attention of the league, too: Miller was named to the NHL All-Rookie Team, becoming the first Ranger to receive the honor since fellow defenseman Brady Skjei in 2016-17.

Miller’s play deteriorated when Trouba went down, but the kid did a respectable job. Even veteran Brendan Smith had a surprisingly good year: he tied his career-high in goals with five and hovered around league-average defensively. He was a valuable veteran.

The Rangers were a strong defensive team in 2021, but there’s room for improvement, especially as they look to make the playoffs in 2022. Many believe that the Rangers will look to add a veteran defenseman to the group next season.

In late May, Columbus Blue Jackets defenseman Seth Jones announced that he will not be re-signing after this upcoming season, when his contract expires.

Apparently, the Rangers have inquired about the 26-year-old RHD and could want to trade for him. I argue that acquiring Jones would be a mistake.

If the Rangers do end up acquiring a veteran defenseman, it should be a lefty.

Top prospect and one of the best prospects in the league, Nils Lundkvist, will be a key part of this team’s defense next season. Another top prospect, Braden Schneider, isn’t far away, either.

Jones has one year remaining on a contract that carries a $5.4 million cap hit. He reportedly will want more than $8 million as the AAV on his next deal, which would make him an expensive add to a team that is going to need to work out a new deal for Fox next summer a well.

The Rangers spending that much money on a player they don’t really need doesn’t make sense, especially if they’re going to look to add players they view as much more of a necessity… like Jack Eichel.

Jones isn’t a fit and the Rangers will have to sacrifice significant amounts of assets and money to get him. Both are key reasons why the Rangers shouldn’t go after him, but the most important is that he really isn’t all that good.

He produces points, but not enough to warrant an egregious amount of money. His best season came in 2017-18, when he put up 57 points in 78 games. He’s never come close to that point total since.

He hasn’t had a positive season offensively since 2018-19. He had some good defensive seasons earlier in his career, but has struggled in his own end over the past two seasons. 2020-21 was the worst season of his career. He was bad offensively and even worse defensively. 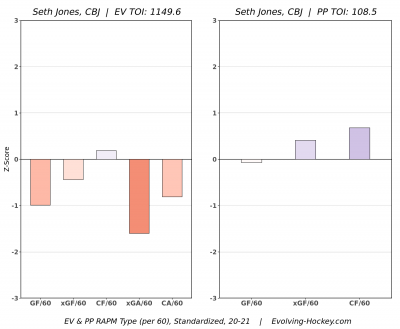 Jones’ physicality, toughness, and grit are likely what make him so appealing to the Rangers. He’s known to use his body and that’s why the eye-test makes him out to be much better than he actually is. 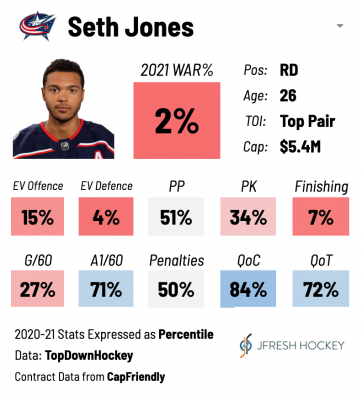 Jones is a great skater, especially for his size, and has been impactful in several situations including the playoffs.

However, he has many flaws that make giving him a big contract a bad idea, especially for a team like the Rangers. Jones has been offensively productive throughout his career, but he’s a bad passer and isn’t great in terms of puck movement.

Lately, the Blue Jackets haven’t been a worse defensive team when Jones isn’t on the ice and Jones has benefited from playing alongside his linemate, Zach Werenski, who’s been significantly better than him over the past few seasons.

Why would the Rangers give a huge pay-day to a player they don’t need and one who wouldn’t be a top defenseman for them? He would, quite literally, be their third RHD behind Fox and Trouba.

No one in their right mind would give $8-9 million to their third defenseman.

Jones is overrated and not as good as many believe him to be, doesn’t fit the Rangers, and isn’t needed.

The only good he would bring to their blueline is his veteran leadership and the fact that he’s physical and gritty, an issue many were discussing at the end of the season.

However, his good traits aren’t nearly enough to warrant a trade followed by a big contract.

The Rangers likely won’t sign him, but if they are considering it, they must look elsewhere and focus on addressing bigger needs and getting better players, especially at such a high cost.