The Devils lose the young winger Nathan Bastian, but this is a good outcome for New Jersey.

The Seattle Kraken have selected RW Nathan Bastian from the New Jersey Devils.

The 23-year-old is promising and although he scored just three goals and 10 points in 41 games this season, he looked pretty good.

He showed promise as an impactful two-way forward and was noticeable on the Devils’ fourth line. 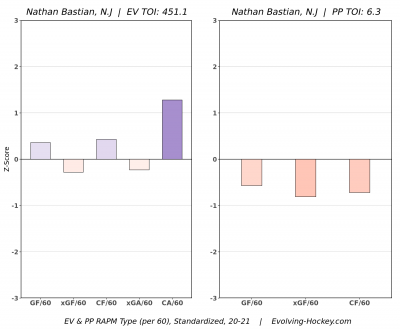 It looks like the Kraken liked what they’ve seen from Bastian and think he has potential, especially given the myriad of options they had.

They could have chosen more seasoned and proven veterans like Andreas Johnsson and P.K. Subban or even a youngster like Nick Merkley.

Bastian looked good as a Devil and was certainly intriguing, but this outcome is good for New Jersey. Bastian, at the end of the day, is replaceable, and the team is lucky to still have guys like Johnsson and Merkley, who can be much more impactful next season.

New Jersey Devils Player of the Week (Week 8): Tomáš Tatar proves his worth