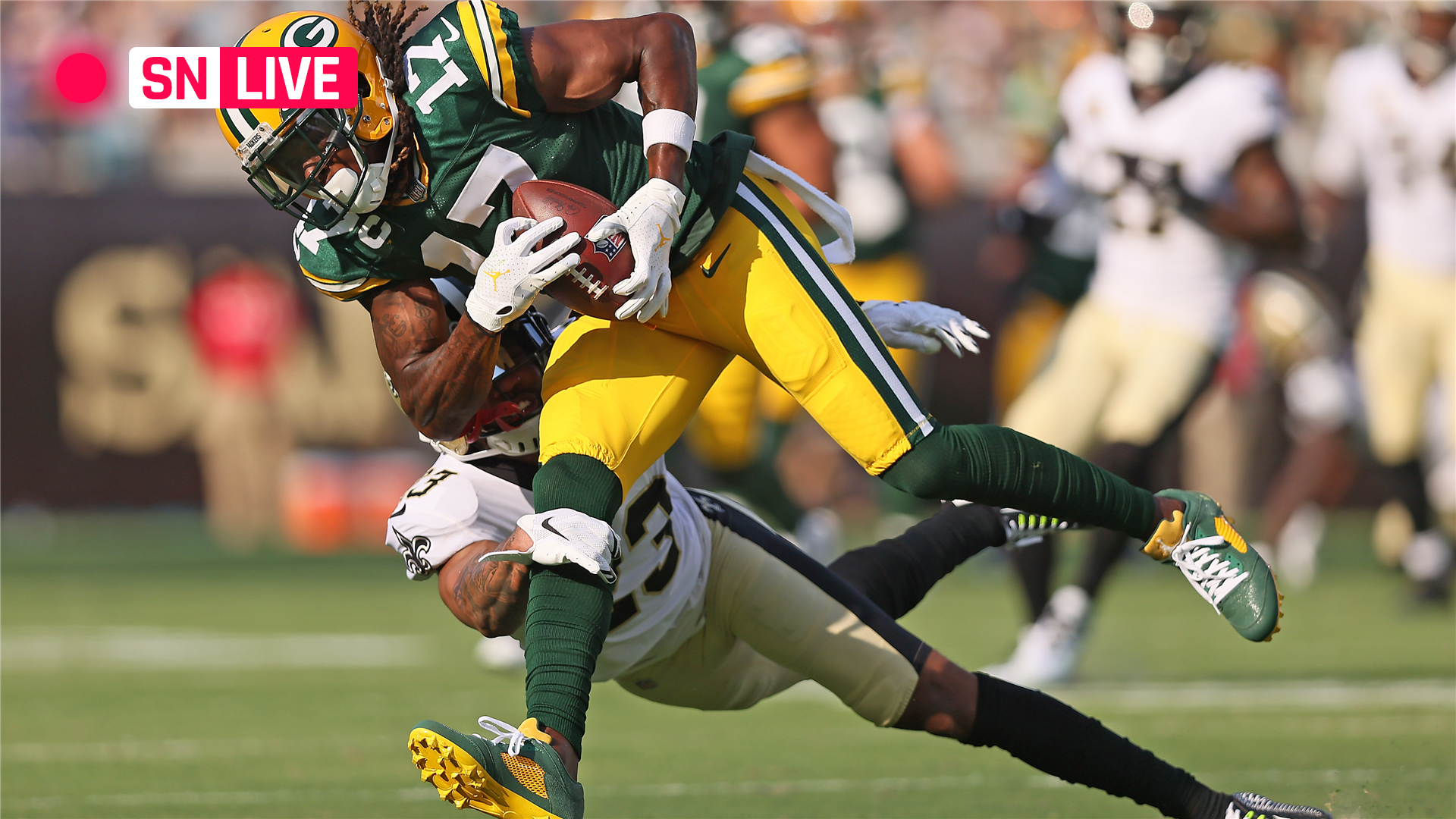 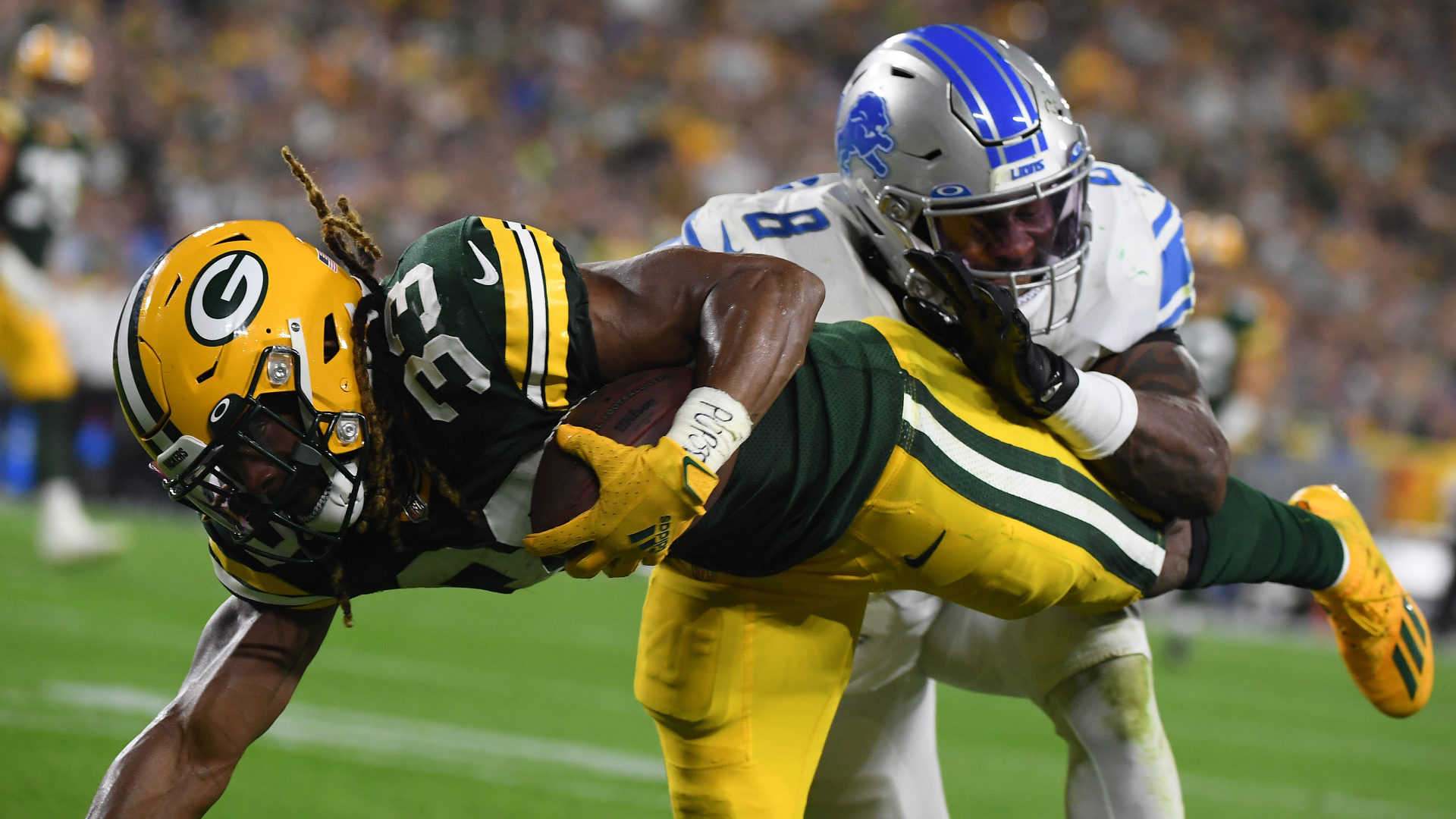 Week 1 of the NFL season looked very different for Jared Goff and Aaron Rodgers, even though both started the season 0-1.

Rodgers turned in one of the worst performances of his career in recent memory as part of a 38-3 rout by the Saints where he had just 133 passing yards on roughly 53 percent of his passes and added two interceptions as well.

He admitted he didn’t play well in Week 1, and provided an interesting explanation for his two interception performance, but reminded people the last time he opened the season throwing two interceptions, he won his only Super Bowl.

Goff, meanwhile, turned in a serviceable performance in Week 1 against the 49ers and played well enough in the third and fourth quarter to keep the game interesting.

Trailing 38-10 with 7:54 left in the third, Goff and the Lions outscored the Lions 23-3 the rest of the way en route to a three touchdown, 300+ yard day for the Detroit signal caller, but it wasn’t enough for the Lions to come all the way back and win.

The Packers called up former Notre Dame wide receiver Equanimeous St. Brown ahead of the game to get another weapon in the rotation for Aaron Rodgers while his brother, Amon-Ra, plays for the Lions.

Sporting News is tracking the live updates and highlights from Packers vs. Lions on ” Sunday Night Football .” Follow below for complete results from the NFL Week 2 game.

11:09 p.m.:  After taking over on the turnover on downs, Green Bay enters the victory formation and will kneel the ball out to end it as the Packers move to 1-1 on the season.

11:08 p.m.:  On fourth-and-3, Goff fires it into the endzone but it comes up short and Detroit turns it over on downs and effectively ends this game with 1:48 left.

11:02 p.m.:  Detroit Is marching but it seems to be futile with the two-minute warning approaching.

10:59 p.m.:  Green Bay can’t do anything after intercepting Goff and they go three-and-out and are forced to punt it away. Detroit takes over at its 9 yard line.

10:55 p.m.: INTERCEPTION PACKERS.  Under pressure and trying to get rid of it, Goff serves up an easy interception and Green Bay takes back over at their 45.

10:54 p.m.:  Jared Goff picks up 26 yards on the ground getting to near midfield and he leads the Lions in rushing tonight.

10:44 p.m.:  Rodgers continues to have the Packers’ offense firing on all cylinders with just over six minutes remaining in this game.

10:40 p.m.:  Goff fumbles the football for the second time back at the Lions’ own 30, but he quickly falls on it and limits the damage.

10:28 p.m.:  Rodgers has completed his last six passes, this one for 11 yards to Robert Tonyan and the Packers are at the Detroit 9.

10:24 p.m.:  Detroit botches the snap and fumbles it, giving the ball back to Green bay with four seconds left in the third quarter.

10:19 p.m.: TOUCHDOWN GREEN BAY.  Aaron Jones with his third touchdown of the day and second receiving one with seven seconds left in the third.  Green Bay 28, Detroit 17.

10:12 p.m.:  The Lions get hit for a defensive pass interference penalty and Green Bay has first-and-10 at midfield.

10:05 p.m.:  Goff was looking for Cephus again and dropped back to throw but the pass was incomplete. The Lions turn it over on downs and Green Bay takes over at its own 25.

10:00 p.m.:  Goff hits Hockenson again and the Lions have crossed midfield to the Green Bay 34.

9:54 p.m.:  TOUCHDOWN PACKERS.  Green Bay takes its first lead of the night on a touchdown to Robert Tonyan for 22 yards on an eight play drive that goes over 80 yards.  Green Bay 21, Detroit 17.

9:52 p.m.:  That last pass from Rodgers moves him past Hall of Famer John Elway for 10th on the all-time passing yards list.

9:48 p.m.:  On second down, Rodgers get sacked for the second time to set up third-and-12 on the Green Bay 24 and Rodgers then promptly fires a strike to Davante Adams in stride for 50 yards.

9:46 p.m.:  Kylin Hill with a nice return as the Packers take over at their 13 to start the second half.

9:39 p.m.:  Some halftime stats: The Lions have outgained Green Bay 197-127, though Detroit is averaging 6.6 yards per play while Green Bay is averaging just over 5. Goff and Rodgers each also have two touchdowns and have just five incompletions between them on 26 pass attempts/

9:38 p.m.:  The Packers defense has been porous this season, and the first half of this game was no different.

Drives allowed by the Packers’ defense so far this season:

9:26 p.m.   The Lions take their second timeout with 17 seconds left in the first half as they look to score heading into the locker room.

9:12 p.m.:  Rodgers finds Jones again out of the backfield, this time for 13 yards and he’s down a yard short of the endzone.

9:10 p.m.:  Rodgers finds Jones out of the backfield as the Packers are marching toward the redzone and look primed to tie it up. Second-and-1 from the Detroit 23.

9:08 p.m.:  Green Bay’s offense continues to flow through Aaron Jones, who picks up 8 yards as the Packers cross midfield to the Detroit 44.

9:03 p.m.: TOUCHDOWN LIONS.  Goff finds Hockenson back shoulder and in stride on a perfectly thrown ball to put the Lions back on top with 7:22 left in the first half.  Lions 14, Packers 7.

9:02 p.m.:  Goff continues his hot start and finds Kalif Raymond to put the Lions inside the Packers’ 10 yard line.

8:58 p.m.:  The Lions are in good field position early in the second quarter after they draw a personal foul penalty and take over at the Green Bay 30.

8:54 p.m.:  Rodgers is sacked quickly on third down to promptly end their second drive. Packers punt from their own goal line and the Lions take over at their 39.

8:47 p.m.:  The first incompletion of the game is by Goff on third-and-9 and the refs call an intentional grouding on top of that. Detroit punts it away on fourth-and-28 from the Detroit 37. Packers take over at their own 18.

8:42 p.m.:  Jared Goff starts the game 7-of-7 as he finds Cephus again to end the first quarter with the game still knotted at 7.

8:38 p.m.:  The Lions have gone to D’Andre Swift on the last few plays and it’s worked as they approach midfield.

8:33 p.m.: TOUCHDOWN PACKERS.  It’s been the Aaron Jones show so far for Green Bay iand it continues as Jones hauls it in for a 4 yard touchdown to tie it up. Packers 7, Lions 7.

8:30 p.m.:  Rodgers hits tight end Robert Tonyan for 19 yards and the Packers are in the redzone.

8:27 p.m.:  Aaron Rodgers’ first pass of the night goes for 20 yards to Davante Adams, and the Packers are starting to march downfield.

8:26 p.m.:  The Packers are opting to run the ball early, with their first three offensive plays coming on Aaron Jones runs to pick up a few first downs.

8:24 p.m.:  The Packers will start on their own 25 after a touchback on the kickoff following the Lions’ touchdown.

8:17 p.m.:  Goff hits Quintez Cephus for 46 yards on third-and-1 and the Lions are poised to strike early. Impressive play by Goff to move in the pocket and create a better throwing lane.

What channel is Packers vs. Lions on today?

The second week of NFL action will wrap up on Monday with ESPN airing its “Monday Night Football” matchup of the Packers vs. the Lions. Steve Levy will be on play-by-play, Brian Griese and Louis Reddick will provide analysis, Lisa Salters will be reporting from the sideline, and John Parry will serve as the rules analyst. Coverage of this broadcast will be on ESPN, with the option to stream from either the ESPN app or on  fuboTV, which offers a 7-day free trial .

Fans can also watch the “Monday Night Football” matchup on ESPN2 , where brothers Peyton and Eli Manning will be back for their MegaCast. That broadcast can also be streamed on ESPN+ or on fuboTV .

The Packers and Lions are expected to kickoff their matchup at 8:15 p.m. ET from Lambeau Field in Green Bay, Wisconsin.

What channel is Chiefs vs. Cardinals on today? Time, TV schedule for NFL preseason Week 2 game