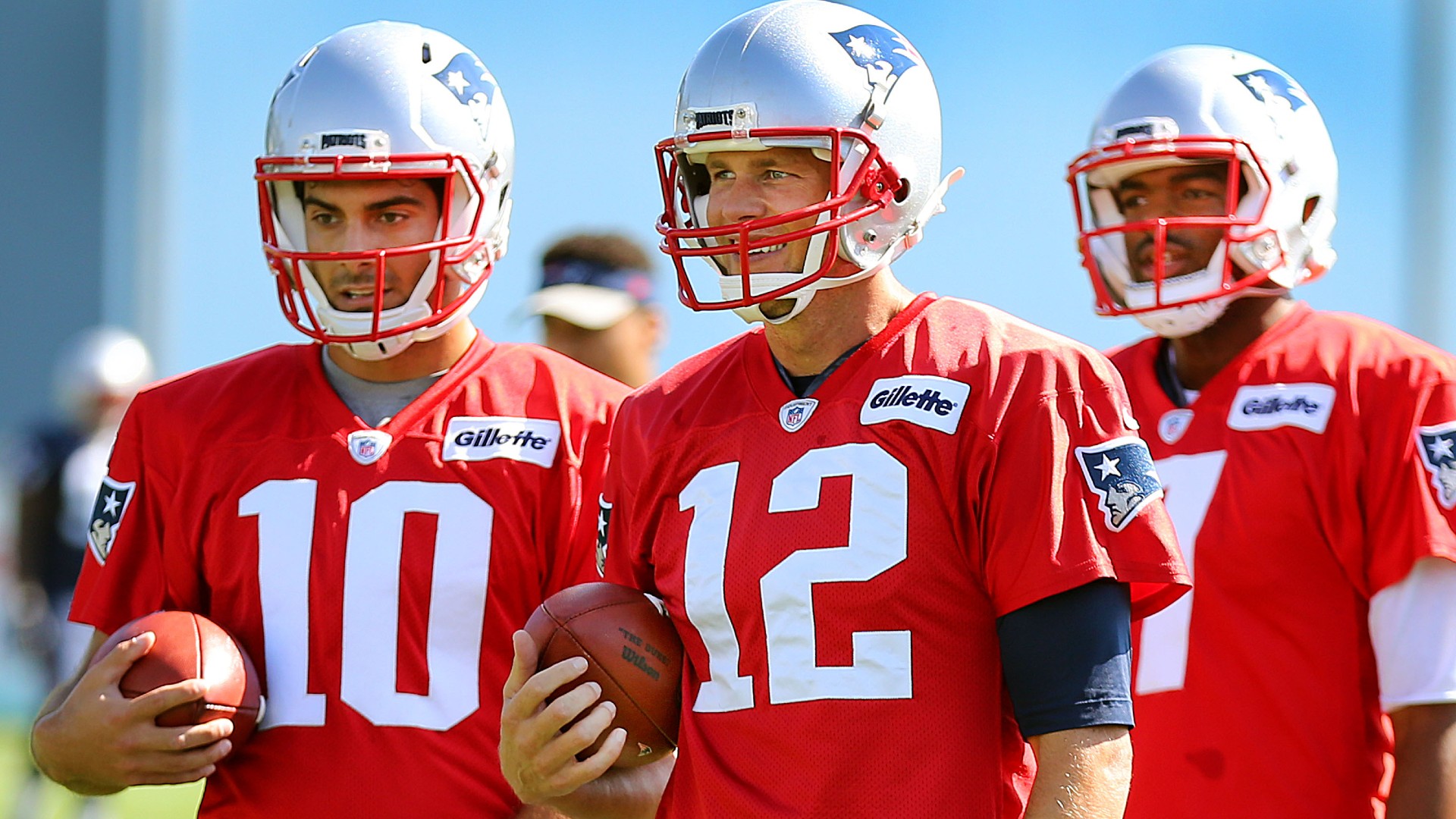 The backup quarterback is the most popular person on the team. Unless, of course, the starter is Tom Brady.

Throughout Brady’s career, many quarterbacks who have sat behind “TB12” have gone on to play in games in the NFL. Of course, there are differing results for all of them, but one thing’s for sure: None have been “Tom Terrific.”

To that end, Bill Belichick’s resume when it comes to drafting quarterback talent isn’t exactly a tried-and-true and proven commodity. Had it not been for Brady, there’s a decent chance that Belichick would be wallowing in QB obscurity, wondering when the phone would ring again for his next job.

Really, that might be slightly hyperbolic — but we’ll never know for sure one way or the other.

Here’s how those quarterbacks fared after they backed up Brady:

*We start with an asterisk here, because Stidham is the only player on this list to have yet to start a game after backing up Brady.

Stidham was drafted in the fourth round of the 2019 NFL Draft, and some expected him to be a moldable prospect for Belichick to insert under center after Brady’s retirement (or, as it proved to be, his departure). Stidham has appeared in eight games so far in his NFL career, and he hasn’t showcased much of anything.

Belichick’s little faith in Stidham as a starter was perfectly encapsulated by the 2020 offseason: Rather than stick with the second-year player to see what he’s got as QB1, the Patriots signed Cam Newton for pennies on the dollar late in the offseason, giving him full reign of the offense in 2020. It was a largely mixed bag altogether for the Pats in 2020, but Stidham is currently projecting as a career backup, if anything.

The massive-armed Mallett was the highest selection the Patriots made at quarterback since Drew Bledsoe was taken No. 1 overall in 1993, picked in the third round out of Arkansas in 2011.

After being inactive his rookie season, Mallett was promoted to second-string quarterback in 2012, appearing in four games for New England in 2012 before he was traded to the Texans in 2014 for a conditional sixth-round pick.

What anyone in Houston saw in Mallett was anyone’s guess: They were likely enamored with the his preseason performance, and a sixth-round pick for a potential franchise passer isn’t exactly a hefty price to pay.

Mallett battled it out with yet another Brady backup (a recurring theme) in 2015 before being traded to the Ravens as emergency starter following injuries to both Joe Flacco and Matt Schaub. He last played in 2017 for the Ravens.

Huard lost out on the QB2 job to some dude named Brady in 2001, spending two seasons in New England before eventually starting a lot of games with the Chiefs between 2006 and 2008.

Huard won two Super Bowl rings as Brady’s backup and parlayed that into another backup job with Kansas City. He would replace an injured Trent Green in 2006 and earn himself an extension with his play — before eventually being replaced by another Brady backup in 2009.

The most well-traveled of any of Brady’s backups, Hoyer started 39 games across six different franchises, most famously getting a run with his hometown Cleveland Browns in 2013. Hoyer’s season would be cut short after falling victim to an ACL injury.

He would start again in Cleveland for the 2014 season, but to diminishing returns, and later would make jumps to Houston, Chicago, New England (again) and Indianapolis, starting everywhere but New England.

A well-respected veteran backup, Hoyer once again is back on New England’s bench, this time presumably helping teach up rookie QB Mac Jones. He started a single game in 2020, replacing a COVID-stricken Cam Newton for a single game.

Cassel serves as the cautionary tale for any team trying to recreate that New England quarterback magic outside the confines of Gillette Stadium.

The USC product replaced an injured Tom Brady in 2008, leading the Patriots to a 11-5 record in Brady’s absence, ultimately missing out on the playoffs. Cassel would be traded from New England to Kansas City the following offseason (as former New England front office man took over the reins in Kansas City), replacing Damon Huard (Remember him?) and almost instantly signing a six-year, $62.7 million contract with the Chiefs to be their franchise passer.

What happened next is a bit of unfortunate football history: Cassel went on to be a pretty average passer for the Chiefs, dealing with injuries throughout his tenure, throwing 59 touchdowns to 44 interceptions across 48 games with KC. He didn’t reach the highs that he did during that one season with the Patriots, even if the situation around him in Arrowhead wasn’t ideal.

Cassel would start games for the Vikings, Titans and Cowboys after his Kansas City run, never reaching the production he did while with the Patriots.

Brissett’s latest stop is in South Beach, backing up — and currently starting in place of — an injured Tua Tagovailoa.

Brissett has gotten his opportunity to start in the NFL, getting and extended look with the Colts, playing in place of an injured Andrew Luck. Of all the backups that have passed through Brady’s shadow, Brissett has made arguably the most of any opportunity given to him, and actually parlayed his opportunity into some good production — and a couple of nice paydays.

Interestingly enough, Brissett had just a single season under Brady’s shadow before New England traded him to the Colts in 2017 in exchange for Phillip Dorsett, with Indy needing the depth at QB when Luck went down with an injury.

Brady replaced the incumbent former No. 1 overall pick as New England starting quarterback in 2001 after Mo Lewis knocked Bledsoe out of a game (and into a Bills uniform the following season).

Even after he returned, Bill Belichick decided to hitch his wagon to Brady, which caught the attention of many in the NFL world.

The rest, as though say, is history.

One of the many prides of Eastern Illinois, Jimmy GQ was once the heir apparent — and the apparent source of drama — to Brady in New England, until he was shipped off to the 49ers for a second-round pick mid-season in 2017.

Garoppolo would start for the 49ers immediately, leading them to a 5-0 record down the stretch in 2017. Garoppolo suffered an ACL injury in 2018, playing in just three games, returning in 2019 and making a Super Bowl appearance with the 49ers that season, losing to the Chiefs.

Garoppolo’s future in San Francisco is a bit foggy at the moment, with the team selecting quarterback Trey Lance with the No. 3 overall pick int he 2021 NFL Draft, but when healthy, he’s been a perfectly serviceable quarterback for the 49ers.

But of all of Brady’s backups drafted to “replace” him, or just be, well, a backup, Garoppolo has shown the most promise and actually lived through on the potential.

Even if Brady may or may not think he’s a “mother f—er.”

What time is the NFL game tonight? TV schedule, channel for Giants vs. Washington in Week 2