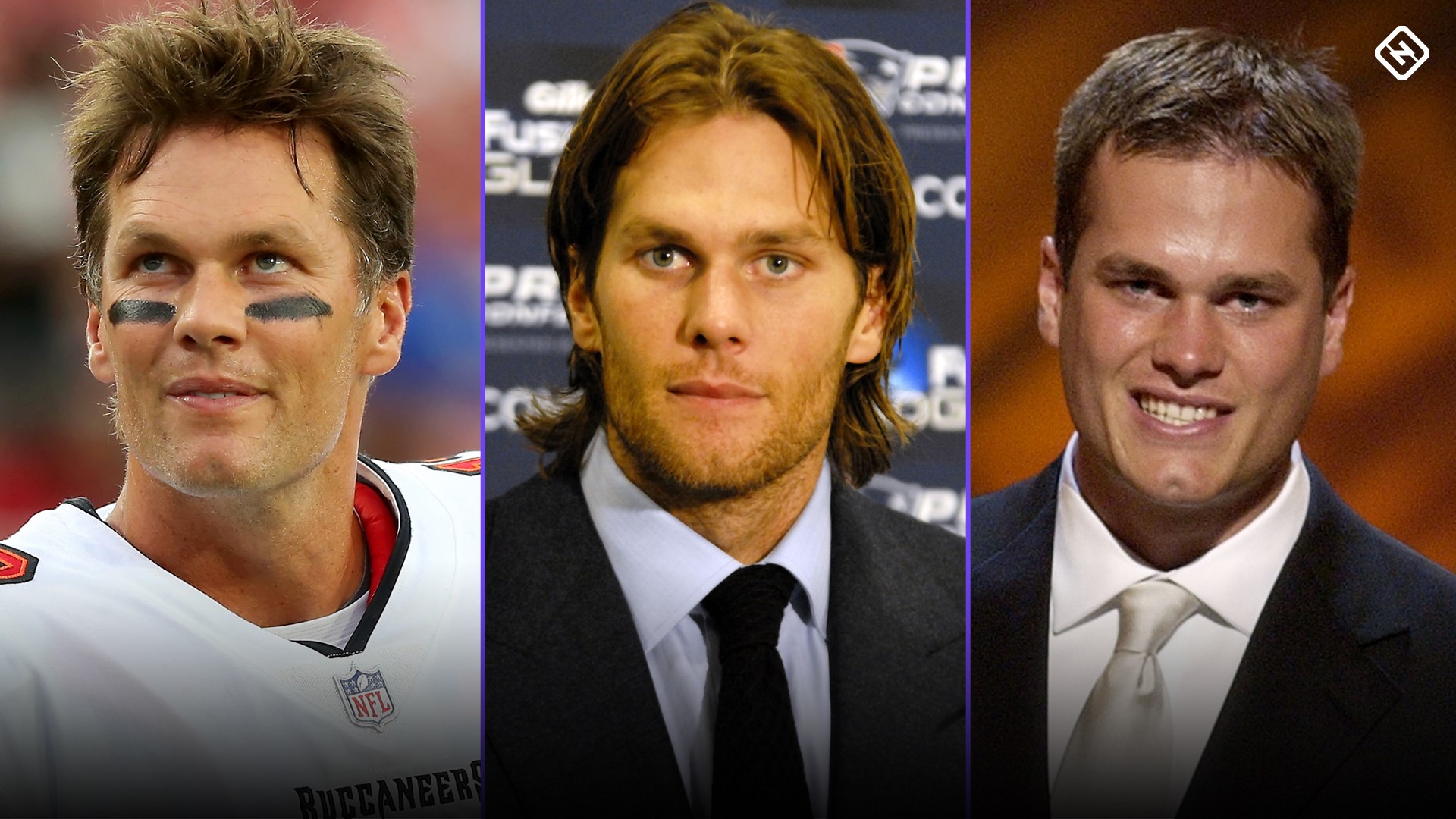 Maybe Tom Brady loves “12” so much because it matches the amount of hairstyles he’s had.

Ah, yes, the football GOAT is as legendary for his follicular fables as he is his storied career on the field. Brady’s salad has often been the subject of much discussion and fanfare, with good reason: The guy married a supermodel, after all, and just being good at football isn’t enough of a reason for that to happen.

Whether it’s his on-field performance or his off-the-field looks, Brady has aged like a fine wine.

While Brady was a sixth-round pick, he’s (almost) always had first-round hair. Here’s a breakdown of Brady’s looks through the years.

At the NFL Combine in 2000, Brady doesn’t really look much like a guy who understands the potential gravitas of his own appearance just yet. Franchise QBs have Franchise QB Looks, after all, and the mop-headed Brady looks like he hasn’t discovered hair gel just yet.

After sitting on the bench for a year, Brady, bad hair and all, would help guide the Patriots to an unlikely Super Bowl win. It was the first of many to come — and many more looks.

If you squint, you can kind of see Matt Damon in “Rounders” here.

Coming off his second Super Bowl win, Brady looks like he’s spending a bit more time in the Target personal care aisle, with a bit more form taking shape to the hair here.

Brady and the Patriots win back-to-back Super Bowls in 2003 and 2004, making for three early on in his young, young career.

Looking a little light in the front there, Tom.

Brady’s next evolution comes in the form of a buzzcut prior to the start of the 2005 NFL season. Brady, coming off yet another Super Bowl winning season, is all business as the Patriots look to make it a threepeat and four-out-of-five in Super Bowls under Brady.

That doesn’t happen. New England would go 10-6, win the AFC East but lose out in the divisional round vs. the Broncos. Hopefully Brady isn’t the real-life Samson or something. That would be very bad news for the Pats.

Here we see Brady at a local Taco Bell after waking up at 2 p.m., staring at the menu and deciding between the 5-Layer Burrito and a Chalupa Supreme.

Something wicked pissah this way comes.

In 2007, Brady and the Patriots were angling for an undefeated season, but we know how that ended. Brady, though seemed to start embracing the playoff beard a bit — maybe he was superstitious, or maybe he was just a little ‘stitious. His hair was reaching lengths previously unseen, but just like the Patriots, it wouldn’t go the distance.

The Patriots would finish the 2007 season with a Super Bowl L at the hands of the doofy Eli Manning and the Giants, who put together one of the greatest playoff runs of all time, in any sport. Brady’s salad was really just getting started.

Here we see Tom Brady signing autographs for fans outside of Gillette Stadi- Wait, hold on, I’m being told that’s the wrong Tom.

If you haven’t notice, Brady’s helmets in the back are a bit shorter, likely designed for this very purpose. It’s (arguably) Brady’s most iconic look.

Also, this happened in 2010. Tom Brady, Belieber? Potentially. After all, Justin Bieber’s “Baby” was released in 2010. You’ve also never seen both guys in the same room at once, I’d bet.

How did Gisele allow this to happen?!

Let’s just all to agree to forget this happened, OK? Thanks.

En route to another Super Bowl appearance, Tom Brady ditches the long-hair look (unfortunately), returning to something a bit more business casual and close to the cap.

The change works: The dominant Patriots romp through the AFC and once again meet the doofy Eli Manning and the Giants in the Super Bowl, and once again are handed a loss.

Brady is starting to look like a dude who’s married to a supermodel.

Not long after Brady lost his second Super Bowl to that darn doofy Eli Manning and the Giants, he did what any franchise QB would do: Got a haircut and became a brand amassador for Uggs for Men.

Brady, becoming a trendsetter, seems like he’s about seven or eight years early on the hair trend here, being ripped straight from the pages of a J. Crew catalogue. Safe to say Brady is in the peak of his career — and he’s peak handsome, too.

Agent Double-Oh-Seven Super Bowl rings continues his hair adventure in 2014 with something a lot shorter, but still styled.

Brady and the Patriots would benefit from a new-look Tom, as New England would win their first Super Bowl in a decade. It wouldn’t come without controversy, though: In 2015, a report indicating the ball pressure at the AFC Championship game would set off Deflategate, eventually leading to a four-game suspension for Tom in 2016.

Even Tawmmy looks a bit disappointed in his look here.

The Brady Revenge Tour is complete with a Super Bowl win in 2016, despite a loss in 2017. The hair remained largely the same except for an interesting side-part look like’s best reserved for first-graders on school picture day.

Definitely not Brady’s best look, though he would rectify it in future years — advanced — years.

Tom Brady, the 47th President of the United States of America, walks on the White House lawn after winning the Super Bowl.

Fast forward to today. A Brady-Belichick breakup, an unexpected move to Tampa Bay, a Super Bowl win and a lot of tequila, Brady is living his best life as a Florida Man with Gronk at his side.

Now, with Brady’s return on Sunday night, Belichick will get a close up of what exactly he’s missing: TB12, but maybe more, his immaculate salad.