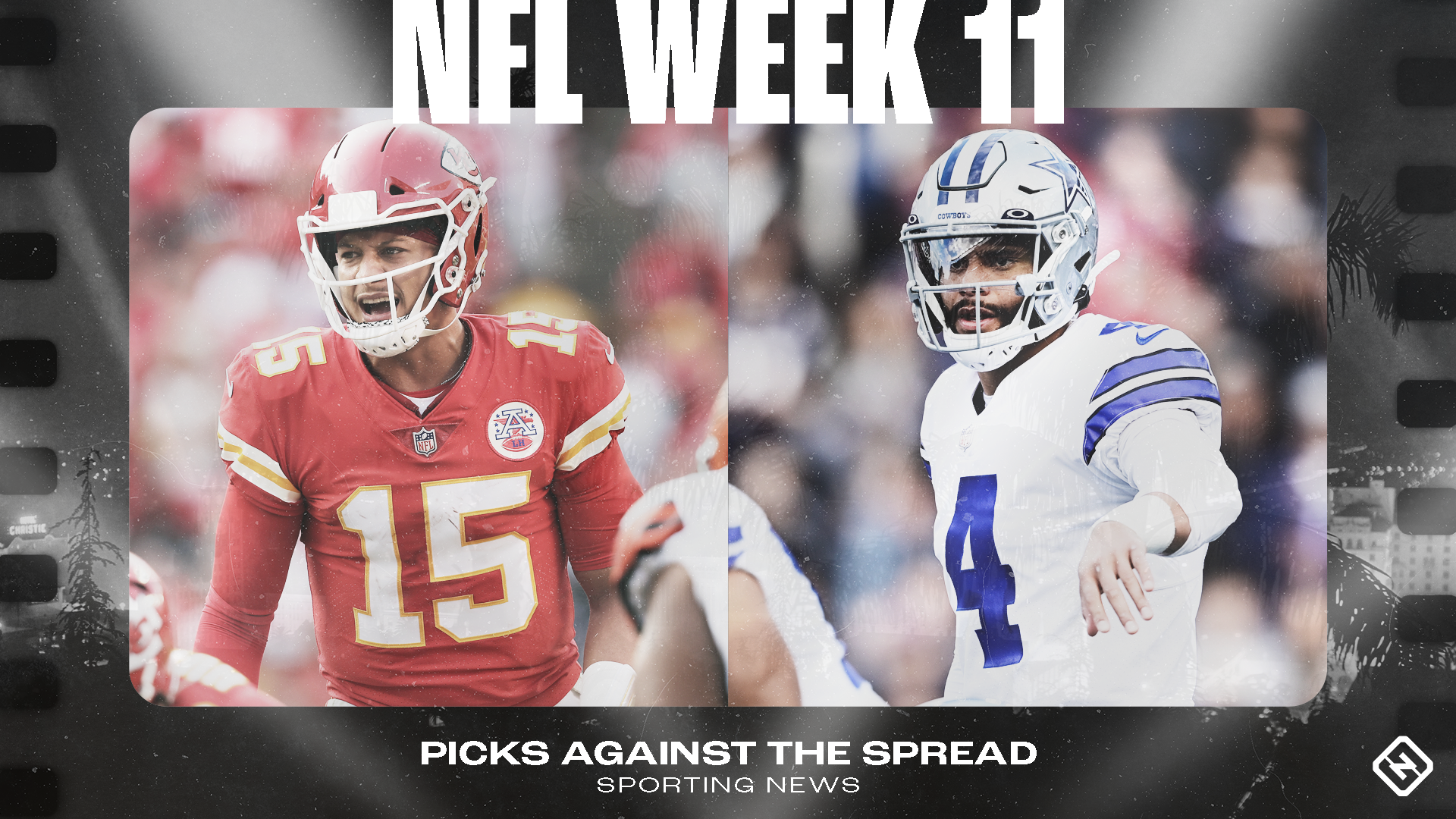 Weeks 9 and 10 were a bit challenging for our NFL game picks and predictions against the spread, as the lines got tighter and smarter to play the “cooler” for an early midseason hot streak. That only means we need to be sharper for the new challenges in Week 11.

The slate of contests goes back to 15 matchups with only two teams, the Broncos and Rams, on a bye. As usual, jumping on the lines early in the week is advantageous for some games before more information is available.

Let’s dive into another loaded schedule with our latest fearless football forecast of pro pigskin prognostications:

NFL picks against the spread for Week 11

The Cowboys and Chiefs saw their offenses explode to expectations in Week 10, with Dallas enjoying a rout of Atlanta and Kansas City passing and running away from Las Vegas. With Dak Prescott and Patrick Mahomes back to their elite statuses after short hiccups, expect this game to live up to its high-scoring, exciting billing. Both QBs like throwing downfield for big plays, but they also have proved to be fine with grinding with long drives leaning a little more on the run. Kansas City’s defense is lifted by home field to make a few more plays than Dallas, while the matchups for Mahomes’ primary weapons are a little better for those of Prescott.

The Patriots are back to taking care of business with Bill Belichick. When they’re playing defense and running the ball like that, it makes the job of rookie quarterback Mac Jones much easier. Nothing needs to give here. They won’t hesitate to stick with their strengths, because they also align with the Falcons’ weaknesses. Matt Ryan’s roller-coaster passing takes another big dip while Jones has more diverse and deeper weapons with whom to easily outduel him.

It’s the Buccaneers’ turn to right the ship in prime time after two straight tough road losses sandwiching as a bye. Tom Brady rarely has two bad games in a row, and he definitely doesn’t have three when his team needs him most with more defensive injuries and a continued offensive hampering. The Giants have shocked the Saints and Raiders, but those games were at home. The Bucs are perfect in Tampa since Super Bowl 55 and although New York’s D has its moment, except for Big Blue to sing sad songs after the bye. Coach Bruce Arians will challenge his team all week and it will play executioner vs. Joe Judge’s club.

The Jets have their wins against the Titans and Bengals at home. Here’s another opportunity for Robert Saleh’s team to add a confidence-building game in a pure rebuilding season. New York might have a healthy Zach Wilson. Miami may feel good about Tua Tagovailoa starting again. But the Jets have had the better rushing attack of late while the Dolphins can’t exploit the Jets in the same way as much. The Jets overall have suddenly more reliable weapons, too, than the Dolphins do.

The Browns also have been burned often of late, losing four of their past six games. They are running out of time to refocus on go on a run that secures their second consecutive AFC playoff host. Baker Mayfield needs to play better as Myles Garrett, the talented defense needs to adjust better. The Lions are a welcome break, making the 170-mile Great Lakes trek southeast to the Dawg Pound. The Lions’ one-dimensional offense won’t work again on the road in the AFC North. Cleveland will run hard with a rested Nick Chubb to help take pressure off Mayfield.

The 49ers have been shaky at home this season but are 3-1 on the road under Kyle Shanahan. They have tended to travel well to the East Coast with calculated preparation and that won’t change on a short week. Shanahan has gotten perhaps too creative and too cute leading his team, but however you slice it, San Francisco’s scheming is much better than what Jacksonville has with Urban Meyer’s staff.

The Colts need to run well with Jonathan Taylor from wire to wire to get the rest of their offense rolling. The Bills’ run defense can at least contain him early and put Carson Wentz in more uncomfortable situations in the elements on the road in November. Josh Allen will find plenty to exploit vs. the Colts’ pass defense and his newfound patience will be an asset here. The Bills face limited Colts’ weapons while the Colts can’t account for all the skill around Allen.

Washington will be down defensive ends Chase Young and Montez Sweat to injuries. But overall the team played the kind of swarming defense Ron Rivera and Jack Del Rio expected with better scheming after the bye vs. Brad. They also got their running game closer to their ideal state with Antonio Gibson. Gibson vs. Christian McCaffrey will be the real duel in his revenge game of sorts with Taylor Heinicke maybe going up against former QB teammate Cam Newton. Rivera and offensive coordinator Scott Turner know the Panthers well and will scheme to get the better of Matt Rhule and his staff in a messy game.

The Ravens have been a much better home team this season, even by suffering their bad loss to the Bengals in Baltimore. The road has been a grind, losing in both Las Vegas and Miami but escaping Detroit and dominating in Denver. The Bears will deploy an improved all-around rookie QB in Justin Fields against a vulnerable defense at home with some of their key components to contain Lamar Jackson returning. Chicago has enough flaws to be exploited on both sides, while Jackson saves the day again in the fourth quarter, with a lot of his arm and some of his legs.

The Eagles took down the Saints 24-21 in Jalen Hurts’ first career start last Dec. 13. They’ll be hoping for a similar result here as mild surprise home favorites. The Eagles have been run-focused of late with Hurts and their committee backs and it has worked to settle Hurts and making the passing game more effective. But the Saints stop the run well and get a break with rookie DeVonta Smith leading a Eagles’ limited receiving corps, and tight end Dallas Goedert also may miss the game with a concussion. The Saints have played sharp short-to-intermediate passing offense with Trevor Siemian and can still run the ball whether it’s Alvin Kamara or Mark Ingram.

The Texans should come out fighting harder after the bye looking for a second win, much like the Lions did on the road looking to crack a goose egg. Tyrod Taylor should be better leading the offense as the Titans’ secondary holes haven’t disappeared. Ryan Tannehill has done just enough with A.J. Brown and not much else helping without Derrick Henry. That happens again here as Mike Vrabel makes sure his team doesn’t get caught looking ahead to New England in Week 12.

This is a tough division game for the Packers as they try to keep their No. 1 seed status in the NFC. But they’re OK without Aaron Jones because of having A.J. Dillon to give plenty of support to Aaron Rodgers. Minnesota’s secondary is a mess and the pass rush doesn’t have much and it already overachieved last week against the Chargers. The Packers’ defense is playing with more confidence and will contain Kirk Cousins when it counts most in the second half.

The Bengals will look great coming off a bye as Joe Burrow picks apart a reeling defense that can’t either cover all of his talented wide receiver or slow down Joe Mixon’s running. Cincinnati also will continue to clean up some defensive issues while Las Vegas will keep coming up craps on every level. The teams have similar resumes, but their tracks diverge here with one still feeling good about its AFC playoff chances going into Week 12.

The Cardinals may opt to rest Kyler Murray for one more week with a Week 12 bye, even though Colt McCoy may not be able to replace him. The Seahawks are bound to get a more normal Russell Wilson at home after he shook off the rust from his finger injury in Green Bay. He also should get a running game boost from Chris Carson. Seattle is running out of time to keep up the winning season streak with Wilson and will desperate to dispatch a division foe. Injuries have forced the Cardinals to regress to a more reasonable place in the NFC playoff picture.

The Steelers suffered two key defensive injuries in Week 10 against the Lions — edge rusher T.J. Watt, cornerback Joe Haden — that are big helps to Justin Herbert and the Chargers’ passing game, who will look to build on what Fields did against that defense in Week 9. Ben Roethlisberger should return to face a tough pass defense likely down wide receiver Chase Claypool again and last week proved just running Najee Harris often can’t carry Pittsburgh offense. Between Austin Ekeler, Keenan Allen and Mike Williams, the Steelers have tough matchups across the board.