Ahhhh yes! It’s Tuesday and we all know what that means! The return of Tuesday MACtion craziness! Our CFB Free Picks went 3-2 last week so we’ll try to keep it rolling! We normally just release 1 Free Pick per day but we like both of the MAC games tonight.

We wouldn’t normally lay points with such a terrible offense but this is a good spot for the Cardinals. They’re at home with a 5-6 record and bowl eligibility is on the line for them. You can bet that the Cardinals will be focused and ready for this one!

Meanwhile, poor Buffalo is 4-7 and is coming off a heartbreaking loss to NIU last week in OT. The Bulls had the ball at the 1-yard line in OT and fumbled the game away. We suspect that the team is still reeling from that devastating loss.

Though there is not much to like about Ball St’s statistical profile, they do have the much better defense in this matchup against Buffalo. The Cardinals rank 83rd in yards per play allowed while the Bulls rank 117th in that category.

Neither team is very explosive through the air so this one will come down to each team’s running game. Though Buffalo’s rushing numbers are slightly better, we think Ball State’s motivational edge will be too much. Our power ratings have Ball State favored by 11 so we’ll recommend the Cardinals at the -6.5 price. 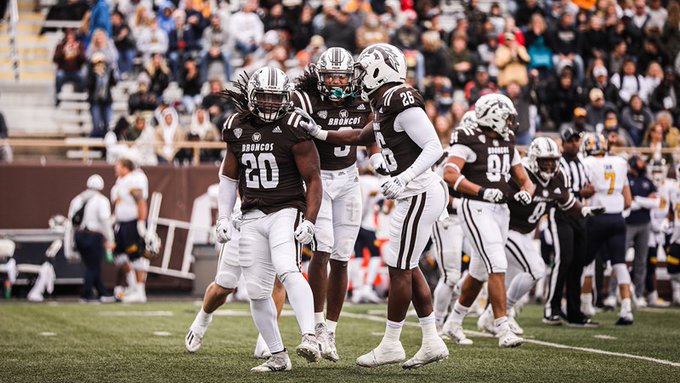 We got the lucky overtime win with NIU last week so it’s tough to bet against them at home. However, this is the mother of all flat spots for the Huskies. Their dramatic OT win over Buffalo last week clinched the division title for them.

We all know these NIU players partied like crazy last week, especially after going winless last year. This is the classic sandwich game, as NIU may rest some players to get ready for the MAC Championship Game next week. This is one of the few times all year that we are going against our power ratings. Yes, the spot really is that terrible for NIU.

Though they’ve stumbled at times down the stretch, there is a lot to like about this Broncos team. WMU averages 254.3 passing yards per game led by quarterback Kaleb Eleby and a trio of talented receivers (Skyy Moore, Corey Crooms, Jaylen Hall). This unit ranks 20th in the nation in yards per pass and should have plenty of success against a Huskies secondary that gives up 7.8 yards per pass (88th).

The Broncos are also pretty good at generating a decent pass rush. They rank 12th in sack percentage as they rack up a sack on 9.43% of snaps. NIU has one of the worst pass rushes in the country. This could help the Broncos stifle a few of the Huskies’ drives.

WMU is also one of the best defenses in the nation on 3rd down. The Broncos rank 6th with a conversion rate of only 30.33%. NIU ranks 70th in that category. This should also help WMU force a few more punts than NIU.

We think the Broncos show up in a big way tonight, even on the road. They’ll be the more motivated team and they’ll want to pick up their 7th win to give themselves a shot at a better bowl. NIU is already planning for next week!

Lay the points! Best of luck with all your Tuesday action! Let’s cash both of these!