We cashed our Free NFL Pick yesterday as the Ravens and Packers game easily sailed over the total. If only all bets were that easy, LOL! That brings us to 1-2 this week. Let’s get back to even with our NFL Pick for Monday Night Football. 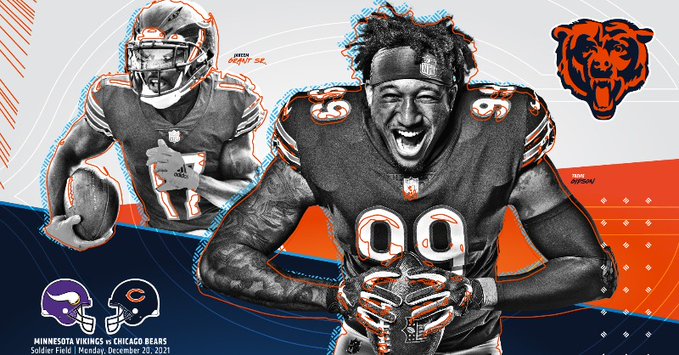 We wish we would have pulled the trigger on this when it opened at 43.5 but we wanted to make sure of the weather conditions in Chicago. The weather shouldn’t affect this Over in any way, as the forecast isn’t calling for a great deal of wind. Let’s talk about why we like this game to easily go over this relatively low total.

Both of these teams have been playing a lot of overs in recent weeks. The Vikings have played 4 overs in a row while the Bears have played in 2 straight overs. Minnesota has been an Over machine this season, especially on the road where 6 out of their 7 games have gone over.

Minny runs the type of fast-paced offense that we look for when betting overs. The Vikings rank 9th in the league in trending pace and we could see them using some tempo quite a bit in this game.

Another reason we like the over is that both of these defenses have been disappointing this year. Neither Minny nor Chicago’s defense can be counted on to get a stop when they really need one.

Minnesota ranks 26th in yards per play allowed, 31st in yards per rush allowed, and 25th in yards per pass allowed. Justin Fields should be able to have some success against this lackluster group. The Vikings’ defense has proven all year long that they are incapable of holding any type of lead.

The Bears’ defense has had an awful season also, as they rank 24th in the league in points per game allowed (25.5). The injury and Covid bug have hit this team pretty hard as star defensive players Eddie Jackson, Roquan Smith, and Akiem Hicks are all listed as questionable for this game.

Cousins should be able to exploit this Bears secondary, as they only rank 27th in the league in yards per pass allowed. We expect Cousins to hook up with his favorite target Justin Jefferson on plenty of deep passes.

Our math formula says this total should be 54.5. However, with all the players out with Covid, we adjusted it down 5 points to 49.5. Even with that adjustment, there’s still plenty of value in the Over. Let’s cheer for some points! Good luck!