Our Best Bet in the Orange Bowl was a blowout loss as Georgia was just way too tough for Michigan to handle. Let’s bounce back BIG today with our Best Bet in the Fiesta Bowl between Oklahoma State and Notre Dame. 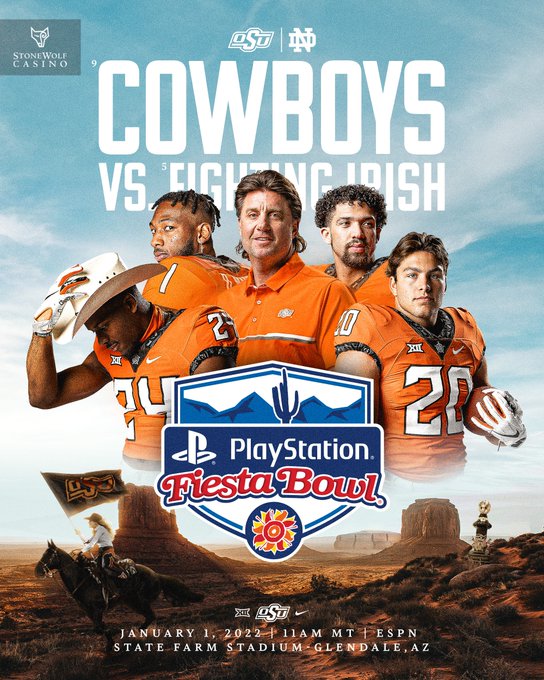 This is one of our favorite bets of the bowl season. This is without a doubt the best defense that Mike Gundy has ever had at Oklahoma State. The Pokes rank third in the nation in yards per play allowed so Jack Coan and the Irish offense could have a tough time generating any kind of momentum.

Notre Dame’s best offensive weapon, Kyren Williams, opted out of this game so that will limit the Irish’s rushing attack. Coan does have some decent playmakers to throw to in wideout Kevin Austin Jr. and tight end Michael Mayer. However, this Cowboys front seven is a nasty group that leads the nation in QB sack percentage and EPA per rush allowed.

As good as Oklahoma State’s defense is, their offense does scare us a bit. Spencer Sanders has quick feet and does well when he gets outside the pocket. However, his passes sometimes sail on him, as evidenced by his 12 INTS. The good news for Sanders is that Notre Dame standout safety Kyle Hamilton has decided to sit out this game as he preps for the 2022 NFL Draft.

We love Oklahoma State running back Jaylen Warren, who has racked up 1,134 yards and 11 TDs this season. Warren is slight in stature but is tough for defenders to get on the ground. With Sanders and the passing game being somewhat erratic, we expect Warren to get at least 25 carries in this game.

We think the Pokes will come out fired up after choking in the Big 12 Title Game against Baylor a few weeks ago. This game probably means more to Oklahoma State than it does to Notre Dame, who is also undergoing a coaching change from Brian Kelly to Marcus Freeman. Take the Cowboys today and Happy New Year to all of our readers!