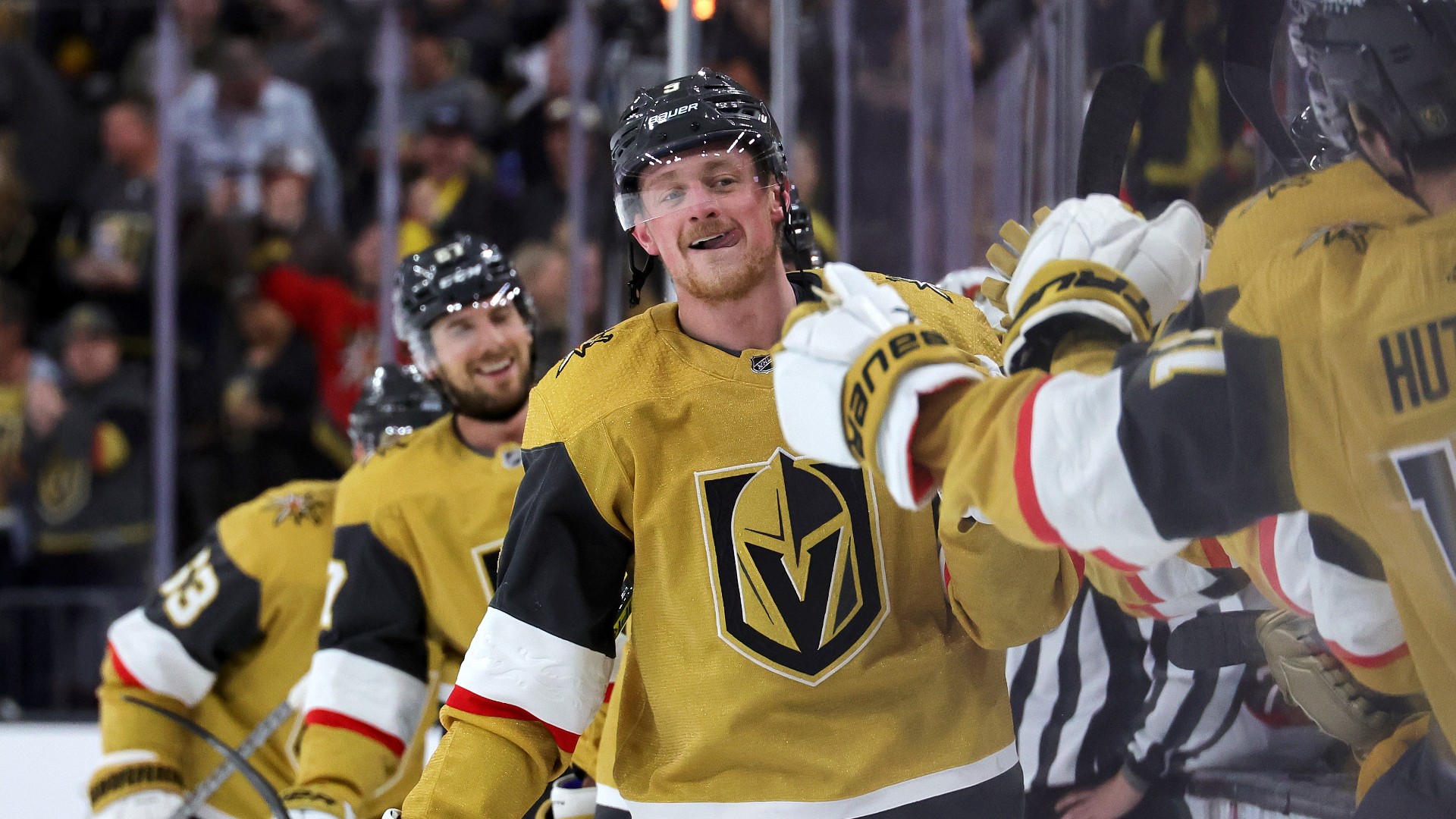 It was just a few short months ago in November that Jack Eichel’s time in Buffalo came to an unceremonious end, with Eichel getting dealt to the Golden Knights. For the first time since the trade, Eichel will step back into the KeyBank Center, the place where he called home for the first six seasons of his NHL career.

Eichel was supposed to be the piece to get the Sabres back over the top. While the center did his part on the ice, the Sabres continued to be a bottom-tier team, failing to reach the postseason in any season Eichel was there. Tension rose with disagreements over treatment for a herniated disk, boiling over with public comments of displeasure and turning what was supposed to be a bright future in Buffalo into an ugly bruise on the franchise.

While both sides were happy to put the Eichel saga behind them, the two meet up once again, as the Golden Knights travel to Buffalo on Thursday. Eichel will get back in front of the home crowd that cheered him on vigorously since he entered the league as an 18-year-old in 2015.

With Eichel’s return, here’s a timeline of the events during his time with the Sabres.

Jack Eichel timeline as a Sabre

In any other draft class, Eichel likely doesn’t fall to the Sabres at No. 2. He was fresh off a sensational freshman year at Boston University, becoming the second freshman to win the Hobey Baker Award as the NCAA’s top player. He was first in the NCAA in goals (26) and points (71), earning Hockey East’s Player of the Year and Rookie of the Year.

But a player by the name of Connor McDavid was also in that class and was selected by the Oilers at No. 1. There was some debate going into the draft if the Oilers would elect to take Eichel instead of McDavid, but Edmonton selected the 18-year-old from the OHL’s Erie Otters.

As a result, the Sabres landed Eichel with the No. 2 pick, considered to be a generational talent.

Eichel scores in his NHL debut

After signing his entry-level contract in July of 2015, Eichel made the team out of camp and was expected to immediately play a big role for the Sabres.

Eichel and the Sabres could not have asked for a better start from the 18-year-old. Eichel made his NHL debut on Oct. 8, 2015, in the first game of the season for Buffalo. He scored his first goal in the second period of the game, roofing a shot over Senators goaltender Craig Anderson.

He became the youngest player in Sabres history to score his first goal.

The first two seasons were very successful for Eichel in Buffalo. He finished his rookie season with 56 points in 81 games and ended up fourth in voting for the Calder Trophy as Rookie of the Year. In his second season, he missed the first two months of the season with an ankle sprain, but concluded the season producing at nearly a point per game clip, 57 points in 61 games.

The summer heading into the 2017-18 season, the Sabres rewarded Eichel with an eight-year, $80 million extension, looking up their young superstar to a long-term deal.

🚨 We’ve agreed to terms with @Jack_Eichel11 on an 8-year extension with an AAV of $10 million. pic.twitter.com/9L8hLcVFzP

At the time, Jim Botterill had just taken over as general manager and viewed Eichel as the centerpiece of the team. While the Sabres as a team were not finding success, they had their young stud to build the club around.

It took over two seasons, but Eichel finally secured his first career NHL hat trick on Dec. 15, 2017, against the Carolina Hurricanes.

The Sabres forward scored Buffalo’s first goal of the game in the second period, cleaning up a rebound in front. He cut the Hurricanes lead to one halfway through the third with a shot from the slot before showing off his patience with the puck, out-waiting Hurricanes goaltender Cam Ward and beating him to tie the game just 10 seconds after his second goal to complete the “Jack-trick”.

Before Eichel began his fourth season with the Sabres, the team announced him as the 16th captain in franchise history in October of 2018.

He was just 21 years old when the club gave him the “C”, following Brian Gionta as the next Sabres captain.

The moment when Phil Housley named Jack Eichel the captain of the Buffalo Sabres @WKBW pic.twitter.com/xuYzbzVUoz

Eichel suffers a neck injury in a collision with Nico Hischier

While the team was not finding success, Eichel continued to play at a high level, recording a career-high 82 points in the 2018-19 season and setting a new career-high in goals with 36 in 2019-20.

However, just 21 games into the 2020-21 season, Eichel collided awkwardly with Nico Hischier during a game on March 7, 2021, against the New Jersey Devils. Ralph Krueger, coach of the Sabres at the time, announced less than a week later that Eichel would be out “for the foreseeable future.”

It later was announced that Eichel had a herniated disk and that would keep him out of the remainder of the season, as he was placed on long-term injured reserve.

Eichel voices his displeasure with the Sabres’ approach to his injury

This is where the drama starts.

In May of 2021, Eichel met with the media to discuss the injury, where he expressed a “disconnect” between himself and the organization over the treatment of his neck.

“I’ve been a bit upset about the ways things have been handled since I’ve been hurt. I’d be lying to say that things have moved smoothly since my injury. There’s been a bit of a disconnect between myself and the organization. It’s been tough at times. Right now, for me, the most important thing is just trying to get healthy, figure out a way to be available to play hockey next year, wherever that might be.”

Eichel wanted to get disc replacement surgery for his neck, while the team’s doctors were advising against it, suggesting he go for fusion surgery instead. The disagreement created a rift between the two sides.

Not only was Eichel voicing displeasure with the Sabres, but also insinuating for the first time that his future may not lie in Buffalo. At the time, he did not confirm or deny that he had asked for a trade.

“There’s a lot I have to consider. But for now, I’m here. I’m the captain of this hockey team. My goal is to be available and to try to help this organization to win hockey games. I’ll do that as long as I’m here.”

Having gone the whole summer with no surgery to heal the herniated disk, Eichel failed his training camp physical in September. The team also decided to strip him of the “C”.

General manager Kevyn Adams met with the media to discuss the decision, in addition to the future of Eichel in Buffalo.

“To this point, Jack is not willing to move forward with the fusion surgery that our doctors are suggesting. So we’re going to continue to work towards solutions … If we have an opportunity to (improve our team), and we feel it’s the right thing for the franchise, then we’ll do it. But if there was a solution over the summer, and we thought it made sense, then we would have done it. Obviously that’s not the case.”

Sabres trade Eichel to the Golden Knights, ending the Eichel saga in Buffalo

After months of speculation and rumors, the Sabres finally pulled the trigger, trading Eichel and a 2023 third-round pick to the Golden Knights for Alex Tuch, Peyton Krebs, conditional 2022 first-round pick and a 2023 second-round pick in November of 2021.

The Golden Knights got a top center in the league to solidify an already deep top-six group while the Sabres acquired a promising prospect in Krebs, a bonafide NHLer in Tuch and two draft picks that will help the team long-term.

Vegas was welcoming of the disc replacement surgery for Eichel, as GM Kelly McCrimmon stated the team would allow Eichel to get the surgery of his choice.

“The decision of the surgery is one that we respectfully defer to Jack and his representatives. Why wouldn’t his people want what’s best for him?”

Outside of the May press conference, Eichel had kept things quiet about what was going on in Buffalo. He didn’t waste much time after the trade was done to dissect the situation.

“It’s been a long process. It’s been dragged out. Quite honestly, I feel a little bit embarrassed. As a hockey player, you want to be in the media, and have people talking about you for your performance and…your team winning games.”

Eichel confirmed what many had speculated — that he had in fact requested a trade from the Sabres.

“It just seemed that we were heading towards another…I don’t want to say rebuild but, we weren’t really in a position that we were going to try and win. I went to the team and said I wasn’t really happy with the idea of that. If that’s the route they wanted to take, maybe it would be better to move me, to use me as a jumpstart.

“Obviously that didn’t go over well. I’m a competitor, I want to win and obviously we hadn’t won. This is a business. (That’s) pretty apparent to me over the last eight months. I looked at that as a decision I was making strictly because I thought that was the best business decision for me as a hockey player.”

Surgery and Eichel’s time in Vegas

Eichel underwent successful surgery on Nov. 12, getting an artificial disk replacement procedure done at the Rocky Mountain Spine Clinic. It was expected that he would need about three months to fully recover from the surgery.

He began skating in a non-contact jersey with the Golden Knights on Jan. 11. Just over a month later, Eichel made his season debut with Vegas on Feb. 16. Since returning to the ice, Eichel has recorded seven points in 10 games, potting his first goal as a Golden Knight on Feb. 20.

Jack Eichel gets his first goal with Vegas, and the @GoldenKnights are up 2-0! pic.twitter.com/y3jACGWtNt

The Sabres remain near the bottom of the standings while Eichel is now playing top minutes on a contender. It was a bitter way for the relationship between the two to end, but it’s one that both teams are looking to put behind them.