Looking for cards of the next generation(s) of stars?

On Monday morning, Panini America and USA Baseball announced their relationship for trading cards has been extended. Panini has been producing USA Baseball exclusive cards since 2012.

Over the years, Panini’s “Stars and Stripes” series has been a fun, affordable place to find cards of high school and college players years before they become highly touted prospects and major league stars.

Current top prospects Adley Rutschman (Baltimore), and Spencer Torkelson (Detroit) appeared in sets in 2019 and 2020, respectively. They weren’t even available for minor league cards at that point because they hadn’t been drafted.

The top prospect likely to be included in this year’s set is current high school senior and Vanderbilt commit Druw Jones, the son of former Yankee (though more notably a Braves’ star) Andruw Jones. 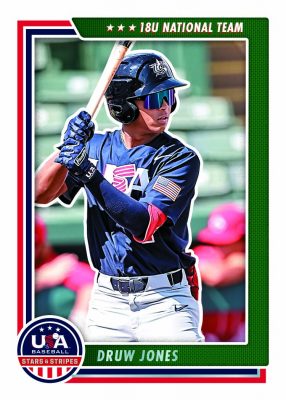 “Our relationship with USA Baseball has given us the ability to showcase tomorrow’s stars first as they make their way through the USA Baseball program,” Mark Warsop, CEO of Panini America, said in the release. “We look forward to continuing the partnership and featuring the top prospects in the game.”

Fans will be able to find unique autographs and game-worn memorabilia cards from current national teams and alumni as well.

“USA Baseball is excited to continue our partnership with Panini America through which collectors and fans can continue to find the first baseball cards of the game’s top prospects,” USA Baseball Chief Operating Officer David Perkins said in the release. “Our national teams and national team development programs are comprised of new players each year and those changing rosters make USA Baseball content truly unique in the baseball card industry.”