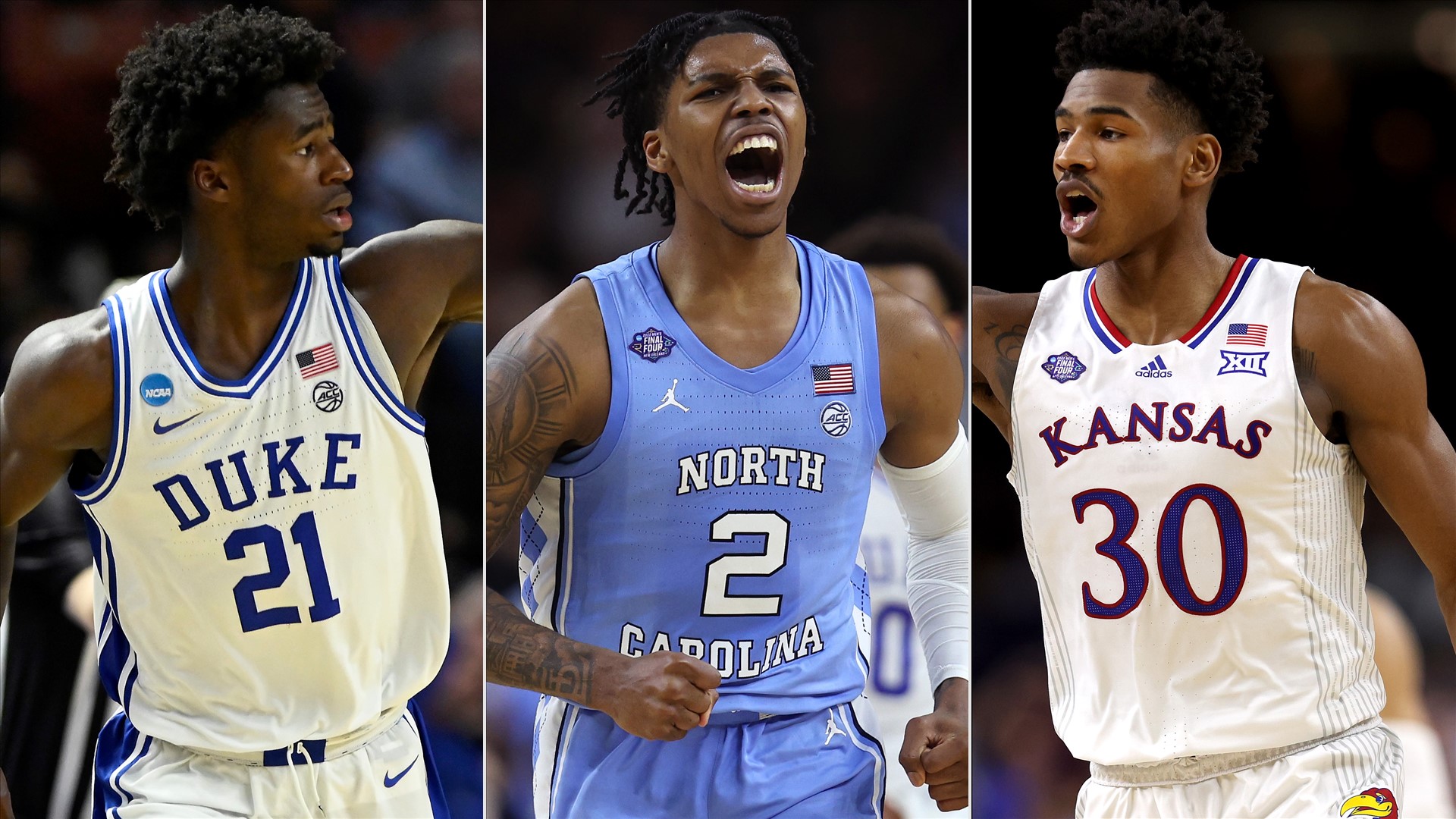 The NCAA Tournament can be a big stage for prospects to raise their draft stock but it can also magnify their weaknesses. While you don’t want to put too much stock on a small sample size compared to a prospect’s full body of work, it’s hard not to highlight how a player competes during the most important games of the season.

Every year, there are players who alter their NBA future with how things unfold in March Madness. Last year, Baylor’s Davion Mitchell became a top-10 pick after he led his team to the National Championship.

Who were the players whose draft stock changed as a result of this year’s NCAA Tournament?

Agbaji had a slow start to the NCAA Tournament but eventually found his groove, helping lead Kansas to the national championship.

The senior wing caught fire from 3-point range, flashing his improved jump shot that has him skyrocketing up Mock Draft boards. Agbaji buried 45.5 percent of his 3-point attempts in the tournament, giving us a preview of the future 3-and-D role he’ll hold in the NBA. At 6-foot-5, 215 pounds with a 6-foot-10 wingspan, Agbaji has the size and length to be a disruptive perimeter defender as a pro. His speed and athleticism make him a threat in transition and as a cutter in the halfcourt.

Agbaji is ready to make an impact in an NBA rotation today, and he put that on display in the Jayhawks’ March Madness run.

To be clear: this isn’t a drastic drop. Griffin was mocked from anywhere between sixth to 10th before the NCAA Tournament, but after a quiet showing, he could fall later into the lottery. Griffin has an NBA body with size and strength at 6-foot-5, 222 pounds. He has a smooth shooting stroke and can create his own shot, but he had a tendency to disappear during games at times this season.

For example, if you caught Griffin during Duke’s Sweet 16 win over Arkansas, you saw why he could be a top-10 pick. He had 18 points on 7-of-9 shooting from the field, knocking down two of his three 3-point attempts. He was confident on catch-and-shoot attempts and also put the ball on the floor, getting to his midrange jumper or all the way to the rim for layups. But when he’s not on, like Duke’s Final Four loss to North Carolina, he doesn’t impact the game in other areas.

It’s tough to evaluate because Duke had so much talent, so shot distribution wasn’t always even. But Griffin’s volatility this season is something to monitor.

MORE: Noh – I tried to watch Duke’s prospects like an NBA scout. It wasn’t easy

Mathurin had one of the best individual games of the tournament with his 30-point outing in an overtime win over TCU. In that game, the Arizona sophomore showcased how lethal he can be with an explosive first step, confident shooting stroke and a deep arsenal of tricks to create his own shot. He flashed his ability to score on or off the ball, he proved he has NBA 3-point range, and he was willing to take and make shots in big moments.

Mathurin wasn’t very efficient in the tournament, shooting 37.3 percent from the field and 32.1 percent from 3, but he also took a high volume of shots (17.0 FGA per game) as part of his role as the primary scorer.

He still has work to be done on the defensive end but Mathurin’s offensive package is worthy of top-10 consideration.

Washington’s NCAA Tournament seemed like it was over before it started with Kentucky falling to Saint Peter’s in the first round. The freshman guard had one of his worst games of the season in that contest, finishing with just five points on 2-for-10 shooting from the field with only one assist. He played most of the game off of the ball, failing to make an impact as a scorer or distributor. Washington had a chance to make up for a poor performance late in a close game but fell into the background instead. As Kentucky’s lead guard, he needed to be more assertive.

Washington was still one of the best guards in the country at times this season, and he also played through multiple injuries throughout the year. He should still be a mid-first-round pick in the 2022 NBA Draft.

Williams was one of the biggest risers in March Madness. Duke’s sophomore center was stifling as a rim protector, tallying 11 blocks over the first three games. He also finished everything on the offensive end, shooting 80.6 percent from the field while only missing seven shots the entire tournament. He displayed everything an NBA team is looking for in a rim-running big man, intimidating attackers with his 7-foot-7 wingspan on defense while catching lobs and staying active on the glass on offense. He doesn’t shoot any jumpers, but he’ll always be a threat as a safety valve in the dunker spot.

Williams’ skillset and mobility as a 7-footer should make him a lock for a lottery pick.

Kessler gave us the good and the bad in this year’s NCAA Tournament.

The good: a near-triple-double with 13 points, 10 rebounds and nine blocks in Auburn’s first-round win over Jacksonville State. Kessler showed why he was the nation’s best shot-blocker this season, averaging 4.6 blocks per game. He was dominant inside and controlled the glass.

The bad: scoring two points with two rebounds in only 13 minutes in a second-round loss to Miami. Kessler’s weaknesses were glaring in this one, showing exactly where he may struggle at the NBA level. Miami liked to play fast with at least three ball-handlers on the floor, and Kessler couldn’t keep up.

Teams will likely target him in pick-and-rolls in the NBA, which could play him off the floor just like it did against the Hurricanes. He’s a great rim protector and a physical presence inside but his lack of agility could make life tough at the next level.

Speaking of the good and the bad, the same that was said of Kessler could be said for Love. But luckily for Love, his “good” is very intriguing as an NBA prospect.

Love is an incredible shot creator, and we saw that several times during the tournament. He poured in 23 points against Marquette, erupted in the second half to rack up 30 points against UCLA and hit some tough shots down the stretch in a 28-point outing against Duke. However, when Love is off the mark, it gets ugly. He shot 1-for-6 from the field in the second round against Baylor, he was 6-for-17 in the Elite Eight against Saint Peter’s and he went ice cold in the national championship, shooting 5-for-24 from the field.

He has a quick and tight handle, great body control when he drives to the basket and already has the stepback 3 in his bag. All of those things project well as an NBA prospect, but he needs to censor his shot selection to avoid those woeful off-nights.

Love should jump into the early second round because of his highs in the NCAA Tournament, though.

Brown had a tough Big 12 Tournament, and that play leaked into the NCAA Tournament.

He failed to score more than seven points in either of Baylor’s games, going 0-for-5 from 3-point range. Only averaging 4.0 rebounds and 1.5 steals while failing to record a block, Brown didn’t do much to impact the game on either side of the ball.

The Baylor freshman had a strong start to the season, which increased his draft stock. He’s a versatile wing with leaping athleticism and breakaway speed, but his offensive game is very limited. His 3-point shooting dropped off significantly at the end of the season and he’ll have to become much more consistent from range to stick as a 3-and-D forward in the NBA.

Has the UEFA Champions League final 2022 been moved from Saint Petersburg after Russia’s military actions in Ukraine?