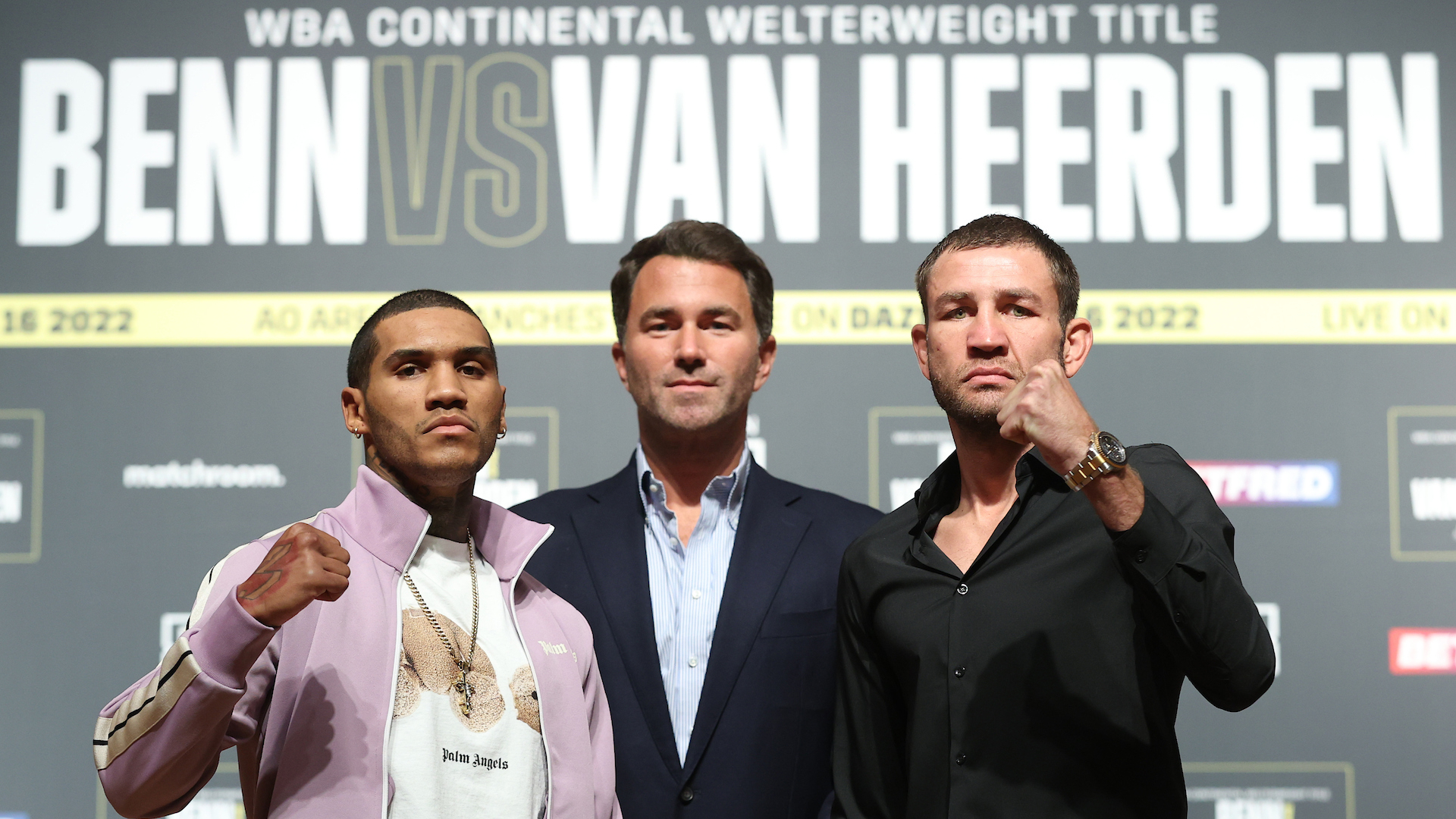 Conor Benn defends his 20-fight unbeaten record against veteran Chris van Heerden in Manchester on Saturday in a meeting with a gatekeeper of the welterweight division who has questioned his boxing skills.

Van Heerden has not stepped inside the ring since 2020 and is desperate to assert his credentials and end Benn’s seemingly unstoppable ascent to a title challenge.

The South African has only lost two of his 31 professional fights, with his sole stoppage defeat coming against Errol Spence Jr in 2015.

22:41pm: Eddie Hearn calls Kell Brook the “perfect” fight for Benn and claims the 35-year-old asked for £10 million to make the contest. “If you want the big British domestics, we’ll have [Kell] Brook or Khan,” says Benn, thanking the Manchester fans and reiterating that established headliners do not want to face him. “I’ll just get in there and iron them out.”

22:38pm: Benn briefly acknowledges the challenges of fighting a southpaw, then insists: “I’ll beat anyone put in front of me – I stand by that.”

The improbable figure of Amir Khan has climbed into the ring with him and is being asked if he will fight Benn, which seems somewhat dangerous on this evidence.

“I’m sure he’s going to go far in life,” smiles Khan. “He’s got a brilliant career. I’m here to support him. At the moment, I’m spending my time with my family.”

22:32pm: That was some finish. Benn had already been landing with venom, but you might not have anticipated that he would brandish the barrage of brutal punches that folded Van Heerden, who has never been knocked out this early in his career.

The final flurry started with a thumping right and ended with the South African on the floor as the fight was mercifully waved off. Benn received congratulations from Barry Hearn by the side of the ring, then hugged his battered opponent. The pair have exchanged more embraces and warm words as Benn parades around the canvas, all the while dancing.

ROUND 2: IT’S OVER! BENN PRODUCES A SENSATIONAL FINISH!

ROUND 1: Ever the crowd-pleaser, Benn immediately looks in the mood to seek huge shots, although Van Heerden does not look unduly concerned, landing with one or two shots of his own to make it clear that he is not to be underestimated.

Two tasty left hookers are probably the pick of the punches from Benn, while Van Heerden chances a hook and uppercut in a neat combination that catches the eye.

TALE OF THE TAPE

Here’s how the two men line up for the main event 👀#BennVanHeerden pic.twitter.com/BzIU6nvBNM

22:24pm: The judges have been introduced and the stage is set. “I said, the time has come!” roars David Diamante in typically bombastic fashion. There are boos as Van Heerden is introduced, lest anyone doubted the identity of the home favourite here.

A crescendo of supportive whistles echo around the arena as Benn has his name and credentials read. The fighters engage in an intense stare-off and touch gloves. You know what comes next.

22:18pm: ‘Sweet Caroline’, inevitably, rang out as the lights were dimmed. Van Heerden emerged all in red and is in his corner. Now Benn, in black with white trim, is shadow-boxing as he makes his way out, initially to the backing of the Fugees’ ‘Ready or Not’.

We’re almost ready to go in the main event! 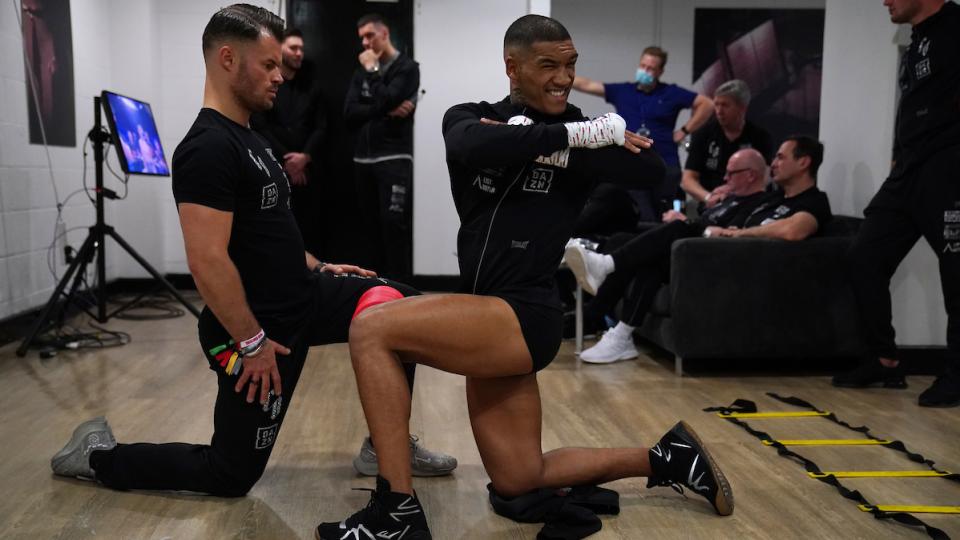 22:12pm: Ex-cruiserweight king Tony Bellew insists Benn does not have it easier than most boxers, as Van Heerden has suggested. “I don’t like listening to him saying that Conor hasn’t had to work as hard,” says Bellew, on pundit duties tonight, nodding to Benn’s father being boxing royalty.

“If anything, the kid’s had to work even harder with twice the amount of pressure. At the same time, [Van Heerden] says it because he needs to have some confidence, because Conor has been so good.” 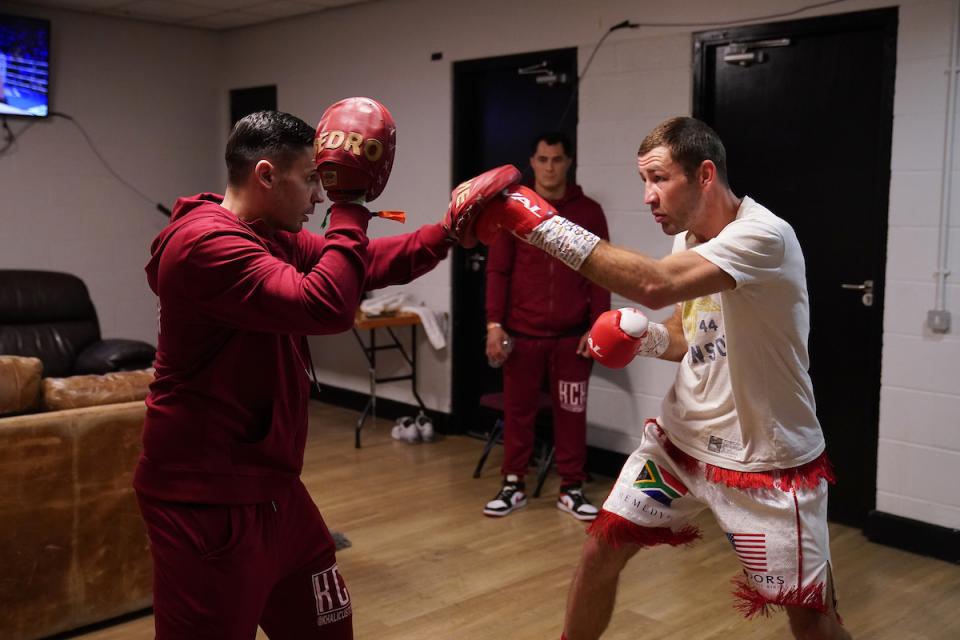 22:08pm: Van Heerden is running through his final preparations ahead of a fight he has been adamant he will win through his superior boxing skills in the build-up. The main event is next!

22:01pm: Billam-Smith retains his Commonwealth and European Cruiserweight titles with a spectacular knockout! No need for the scorecards here as the defending champion catches McCarthy with a vicious right hook, pummels him on the ropes and leaves him face-down on the canvas with a clubbing final right!

McCarthy looks over to his corner and shakes his head. Billam-Smith races away to celebrate, then consoles his beaten rival as he sits on his stool in a daze.

9:52pm: Billam-Smith and McCarthy have produced an engrossing encounter, although there’s little doubt that the champion has been busier and more successful, particularly in the third when he landed several meaty shots.

McCarthy is desperate to avenge that defeat last year and the Irishman has come forward more at the start of the sixth, although he looks increasingly tired – and Billam-Smith is also showing signs of fatigue as we pass the halfway stage of the scrap.

BIG right hands from McCarthy in the second 🔥#BennVanHeerden pic.twitter.com/zDllMkKEvo

9:28pm: The chief support is about to begin as Chris Billam-Smith defends the Commonwealth and EBU European Cruiserweight titles he won against Tommy McCarthy in July 2021.

Englishman Billam-Smith won by a split decision on that occasion, making this as difficult to call as it is important for both men – each seeking a more conclusive finish.

McCarthy has not fought since then and has discussed this as a potentially career-saving bout.

9:21pm: Hatton earns a wide victory over Gregores, although the prospect put in a somewhat ragged performance at times, taking a few shots along the way.

‘Roll With It’ by Oasis rings out to mark his win, and Froch suggests that Hatton’s inexperience showed against an opponent who suffered his tenth defeat in 14 fights. 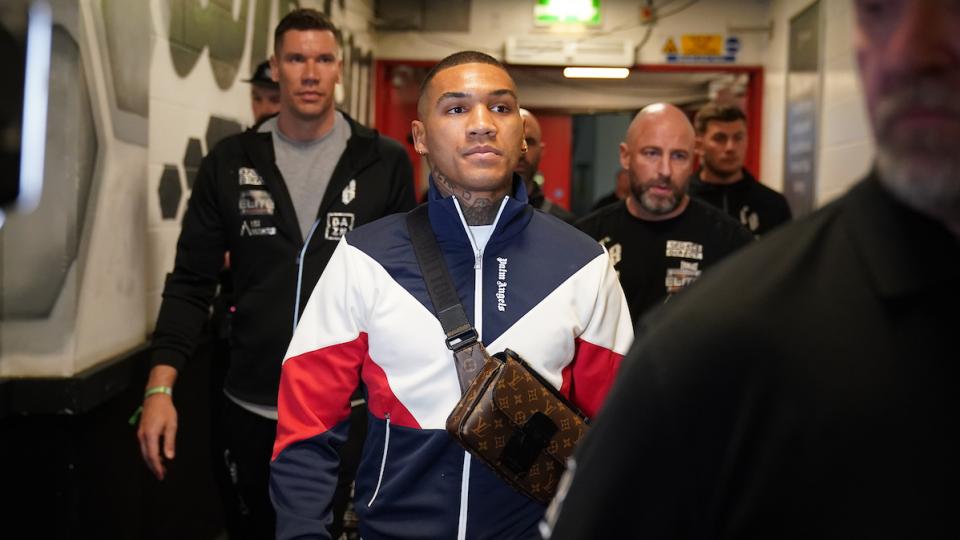 9.11pm: Former super middleweight champion Carl Froch has been talking about the challenges Van Heerden will pose to Benn as a southpaw. “Conor would have done a lot of southpaw sparring, but sparring isn’t fighting,” warns Froch.

“Everyone is expecting Conor to do the business. We’re not sure if he’s going to make it at world level but we’re going to find out soon enough. I just hope he doesn’t take his foot off the gas.”

8.48pm: Argentina’s Ezequiel Gregores receives a rather hostile reception as he enters the arena for his latest lightweight fight. That’s because he’s taking on Campbell Hatton, the son of British boxing legend and Mancunian icon Ricky.

No surprise, then, to hear 21-year-old Hatton enter to the strains of ‘Blue Moon’, as his title-winning father so often did during his storied career – and wearing attire celebrating Manchester City.

Hatton only made his professional debut in March 2021 but is already seeking the seventh win of a flawless early record.

8.37pm: Alycia Baumgardner had a happy trip to England when she visited Sheffield in November, winning the WBC and IBO female super featherweight titles with a fourth-round TKO of Terri Harper.

The 27-year-old from Ohio has impressed again here, winning every round against the veteran Matthysse, who showed admirable fortitude to fight on despite taking ample punishment.

The announcement of Baumgardner’s win is a formality, raising her record to 12 wins from 11 fights – although she could not record an eighth knockout of her career tonight.

8.05pm: Edith Soledad Matthysse has just entered the ring carrying the flag of her native Argentina. The sister of former title holders Lucas and Walter Matthysse held belts of her own between 2013 and 2016 and is a 41-year-old who has been a professional for 15 years.

Matthysse is challenging Alycia Baumgardner for the WBC and IBO Super Featherweight titles, and the American has just headed into the spotlight to the sound of Queen’s ‘Another one Bites the Dust’.

They’re sizing each other up across the ring. Baumgardner has her hand raised as a member of her entourage holds her belts up in her corner. The second fight of the main card is about to begin.

Bridges believes Van Heerden’s eighth-round defeat to Errol Spence Jr in Canada in September 2015 will be an instructive reference point for Benn’s progress.

“I just want to see how early Conor can finish him,” she says. “If Conor finishes him earlier than Spence, that will be a statement. He keeps proving the doubters wrong. You can’t not believe.”

7.49pm: That fight between Cullen and Bejulsky started the action in intriguing style, and it’s the home fighter who has his hand raised after eight rounds in which he became increasingly dominant, leaving Bejulsky bravely backing up in the closing stages of the showdown.

The 28-year-old improves his record to 21 wins from 25 fights and shows off a tattoo for The North Face on his back as he returns to his corner in triumph.

7:15pm: The super middleweight clash between Jack Cullen and Vladimir Belujsky has just launched the main card in Manchester.

Cullen is an entertaining 6ft 4in brawler from nearby Bolton. Known as ‘Little Lever Meat Cleaver’, he’s aiming to bounce back from a TKO defeat in December which was the third loss of his 24-fight professional career.

Belujsky has the alias of ‘Big Bad Vlad’ and is a Slovakian based in Ireland with a record of 12 wins from 16 bouts.

6:40pm: Not many children grow up with fathers who are famous for fighting. Conor Benn experienced that upbringing because of his legendary dad, Nigel, who was a world champion between 1990 and 1996 – and Benn junior is now looked up to by Eli, his baby son with wife Victoria.

“It’s a blessing,” he said, reflecting on Nigel Benn’s retirement when he was born in September 1996. “Having my son there does make me think that I fight for a lot more than myself, in a way.

“I just want to show my son that discipline, hard work and applying yourself can be a way of life – irrespective of the background you come from. My son is going to be raised well: he’s going to have the luxuries that I had, he’s going to be ‘silver-spooned’. But if you come from any walk of life – whatever it is – as long as you apply yourself, you’re going to be successful at it. I like the idea of my son knowing that I work hard for the life he lives.”

6:20pm: Conor Benn has fought three times since Chris van Heerden last entered the ring – a bout that ended in a no-decision against Jaron Ennis in December 2020 – and the 34-year-old has seen enough of the Brit to feel considerable confidence.

“I’m a much better boxer than Conor Benn,” Van Heerden said in the build-up, offering an observation that Benn is predictably withering towards. “In my opinion, Conor is an emotional, angry fighter.

“He relies on his power. He cannot box with me. He’s not a boxer. He’s a power puncher and I don’t rate him as a boxer. That’s why I’m saying he’s a very emotional, angry type of fighter, in my opinion.”

6:00pm: Welcome to The Sporting News’ coverage of Conor Benn vs. Chris van Heerden. We’ll bring you results from throughout the main card – which begins in one hour – before live round-by-round coverage and post-fight analysis from the main event. 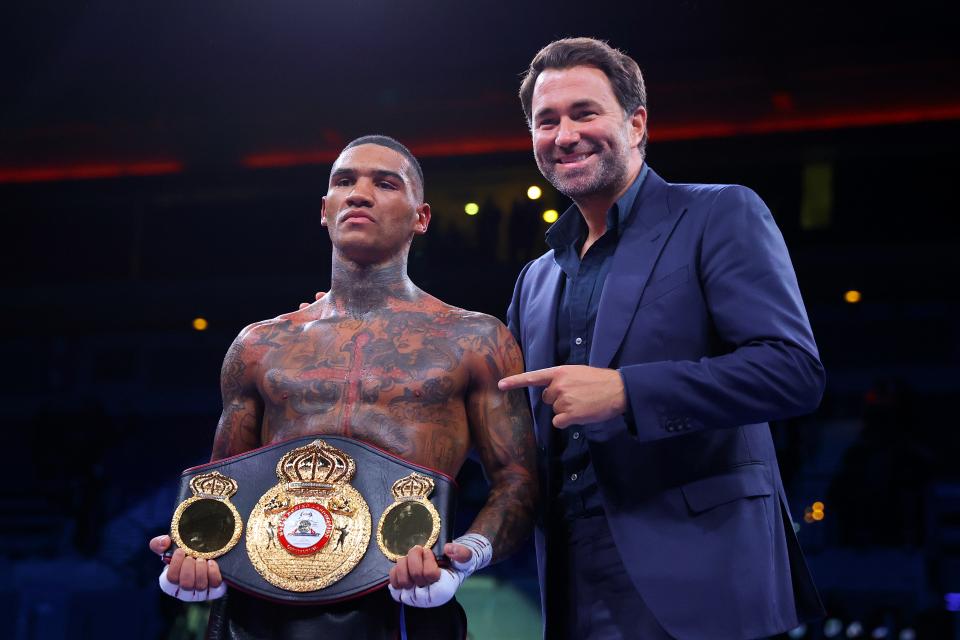 How to watch Benn vs. Van Heerden

The prelims and the main card for Conor Benn vs. Chris van Heerden will be available through the DAZN app.