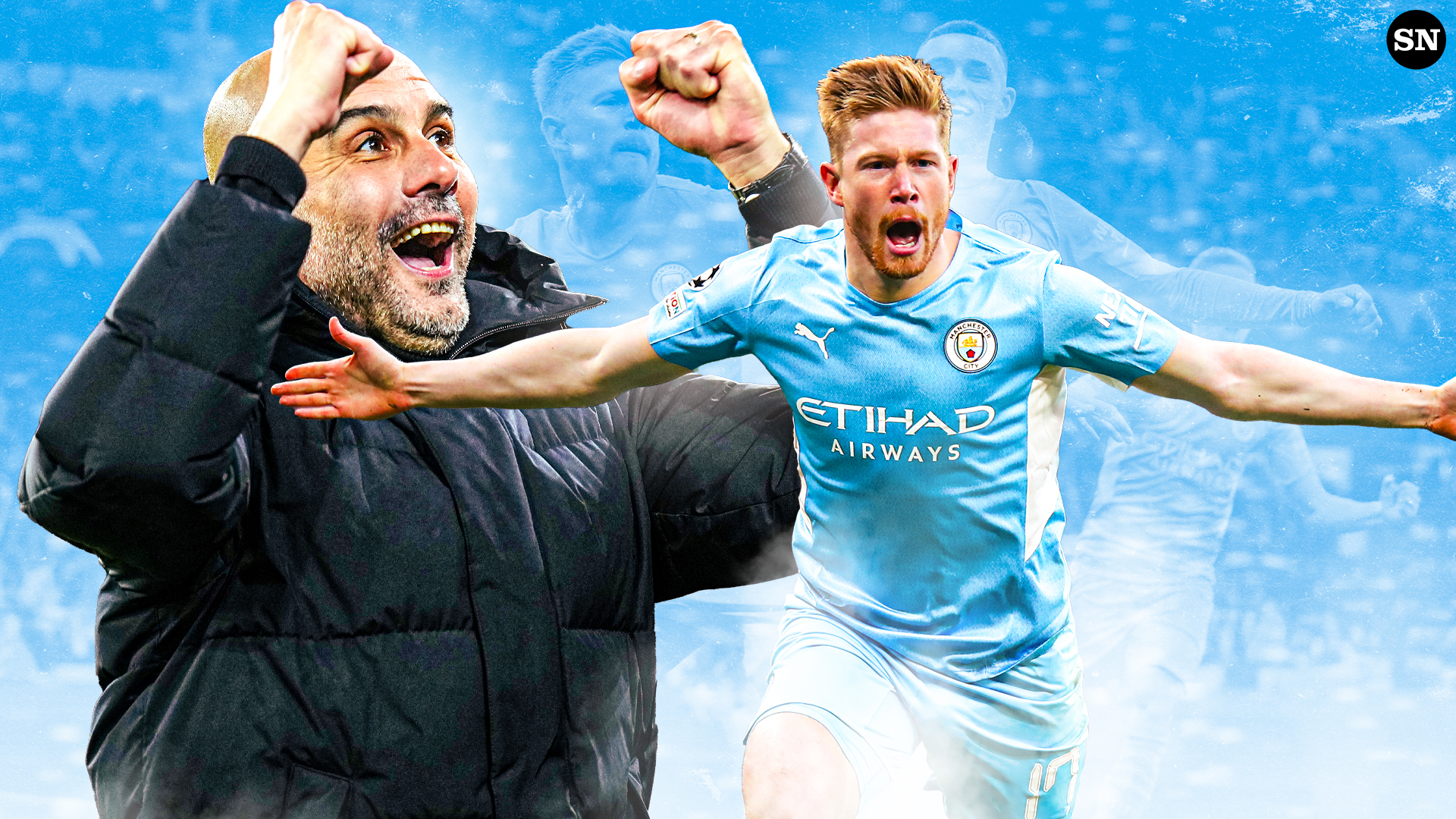 It’s a year and a half since Pep Guardiola went back to basics at Manchester City and the results speak for themselves.

In December 2020, City’s Premier League title bid was floundering. A limp 1-1 draw at home to West Brom – who sacked head coach Slaven Bilic in the aftermath of the game and went on to be relegated – left them sixth in the table with 20 points from 12 games.

“After that game, I had a feeling this is not a team I can recognise. I did not like what I saw,” Guardiola told Sky Sports.

His response was to double down on his signature playing style. City would make more passes, take a greater share of possession and increase their control of matches.

Since that West Brom game, Guardiola’s team have won 69, drawn seven and lost 12 of 88 matches, winning the Premier League and Carabao Cup in 2020/21, when they also reached a maiden Champions League final.

With four top-flight games remaining this time around, they are a point ahead of Liverpool in another gripping title race domestically, hold a 4-3 advantage over Real Madrid heading into the second leg of their Champions League semi-final at the Santiago Bernabeu on Wednesday and Guardiola is rumoured to be on the verge of penning another contract extension.

Why have some people called Man City boring?

Since that mid-season reset there has been a notable strand of criticism along the lines of City being a boring team. Some of this has been fairly spurious and made in bad faith, but it is true that Guardiola’s tweaks were designed to remove jeopardy from games whenever possible.

In their most recent Premier League success, City’s attacks progressed upfield at an average speed of 1.1 metres per second, according to Opta, which was the slowest of the Guardiola era. Their average open play sequence clocked 15.1 seconds and had never lasted longer.

Following their manager’s maxim of seeking the “extra pass”, City were far less vulnerable to counter-attacks than they were when ceding the title to a rampant Liverpool in 2019/20. The lack of a specialist striker to bail them out of tight spots over most of the past two seasons also added to the appeal of this control, grinding opponents down and staying out of harm’s way. 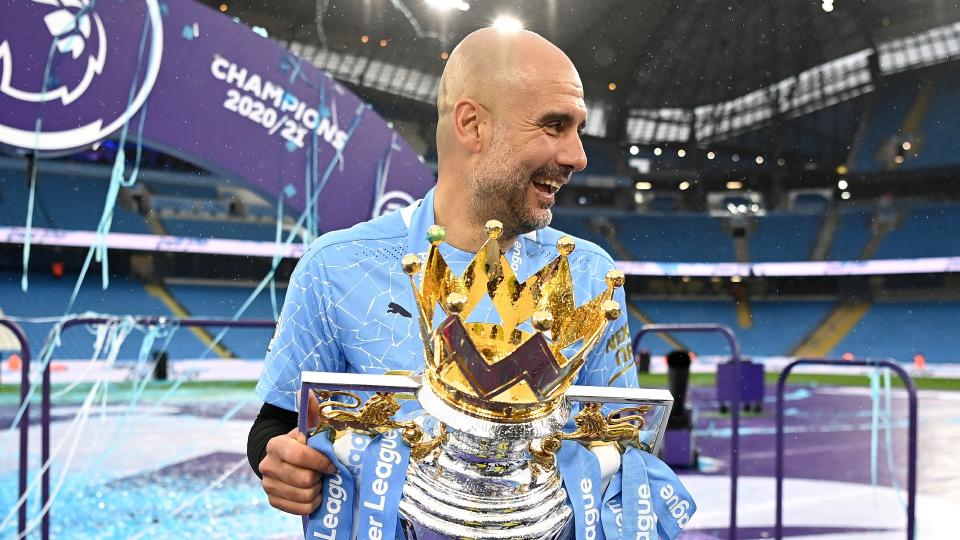 This general removal of chaos was a factor in City progressing to the Champions League final, which they lost 1-0 to Chelsea. Their previous campaigns in Europe’s top competitions under Guardiola were notable for thrilling, dramatic defeats – such as the away goals exits to Monaco and Tottenham in 2017 and 2019 respectively. Last year, tricky ties against Borussia Dortmund and Paris Saint-Germain were negotiated with impressive authority.

In this context, something very strange happened when City faced the two teams who stand between them and this season’s two biggest prizes. Against Liverpool at the start of last month and Real Madrid last week, all hell broke loose.

Did Man City beat Liverpool and Real Madrid at the Etihad Stadium?

There were certainly no complaints regarding the entertainment value in both of those instant classics. On each occasion, City were magnificent – taking early leads as their blurring attack repeatedly punctured the defences of two European heavyweights.

However, they could not completely shake off their foes. Guardiola bemoaned how City “left [Liverpool] alive” having led twice in a 2-2 draw that meant the Premier League battle remained on a knife-edge.

There were glaring chances missed on that occasion, as was the case in last week’s stunning 4-3 win over Madrid. Having led 2-0, 3-1 and 4-2, City should have been heading to the Spanish capital with a more substantial advantage.

The balance of play in both games meant Guardiola’s tactics were vindicated. But why, after studiously keeping their chin out of harm’s way for 18 months or so, did City engage in slugfests with two of the most lethal attacking teams around?

There was an element of design to this against Liverpool, as Guardiola harnessed the pace of Raheem Sterling, Gabriel Jesus and Phil Foden in behind the Liverpool defence with sharp direct and diagonal passes. Against Madrid, the brilliance of Karim Benzema and Luka Modric conspired to make City victims of elite circumstances. 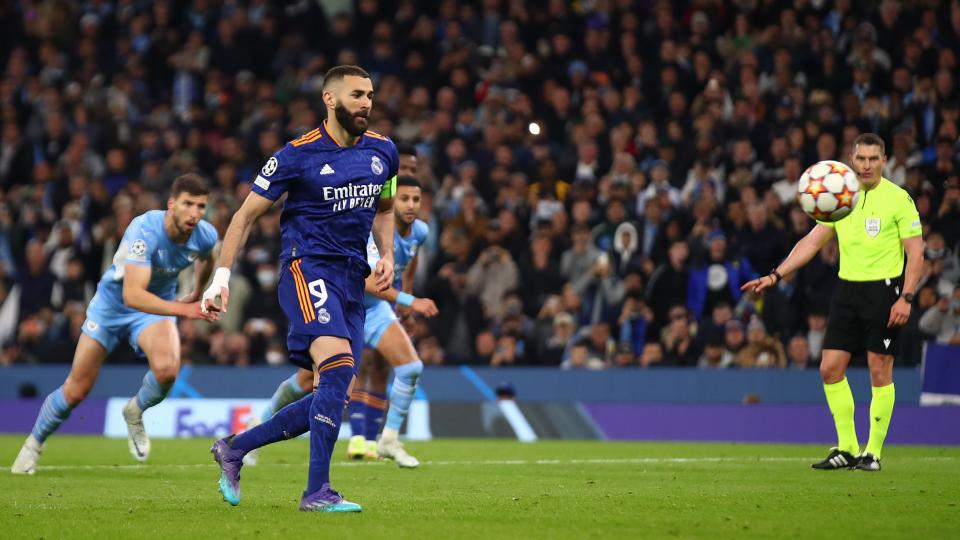 “The game against Liverpool I agree with you, Madrid I don’t think,” Guardiola said when reflecting on the nature of both matches last week. “Yeah, when you have seven goals there are a lot of ups and downs but we didn’t try to make these type of games.

“It happened because both teams want to attack, they lose a goal, [they have] opportunity to run. These type of things happen, ups and downs, when these types of teams create the way they play.

“I think Liverpool are the same, they want to attack, Madrid want to attack. In the end, with the quality of the players there are the moment that you have control. [Then] there are other moments…

“It depends as well for the quality of players that we put on the pitch. There are players most used to making transitions, others more the control.

“When we play a false nine we don’t have these kind of games quite often. When we play more a proper striker like Raheem and Gabriel we are more in that position [for multiple transitions].”

Even more pivotal than those forwards Guardiola mentioned is the player who is arguably more attuned to the big moments than any other player in world football right now.

City’s opening goals in the home games against Liverpool and Madrid came courtesy of Kevin De Bruyne. He also scored the only goal of the Champions League quarter-final tie against Atletico Madrid, broke the deadlock in March’s Manchester derby, hit a solo winner versus Chelsea in January and found an equaliser at Anfield earlier in the season that might still look crucial in the final reckoning. 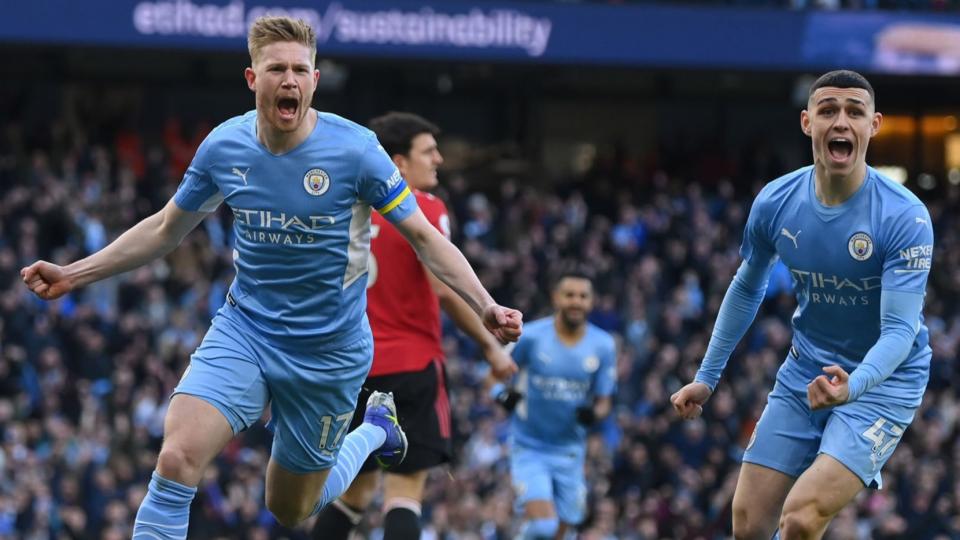 De Bruyne in this current mood means City can be just as much of a problem to their opponents when games are open as on those multiple occasions when they hog the ball.

“He’s so important. He’s the best in the world when he can run and make these type of transitions,” Guardiola said.

“There are certain balls where he can run and break the half-space for the opponent. It’s devastating. He’s really, really good. Everybody knows it.”

Early last year, De Bruyne missed five consecutive Premier League matches due to a hamstring injury. During this period, Rodri, Ilkay Gundogan and Bernardo Silva slotted together smoothly as Guardiola’s midfield three and they often remained together after De Bruyne’s return, with the Belgium star playing as a false nine for much of the run to the Champions League final.

He is now back in his signature position and roving with serious intent. If the end result is Premier League and Champions League glory, then his manager’s “best in the world” claims are likely to have been emphatically backed up.

Guardiola would undoubtedly sign for an uneventful night at the Bernabeu right now, one where control holds sway. But if chaos unfolds in Madrid and then again in a potential Champions League final against Liverpool, De Bruyne looks in the mood to decisively shape events in his team’s favour.